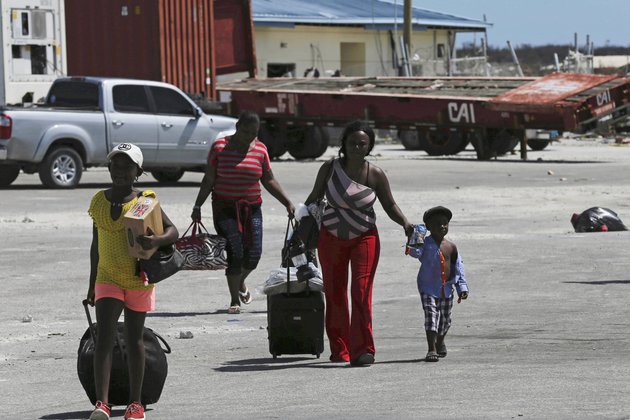 U.S. President Donald Trump said his administration is discussing the possibly of granting residents from the hurricane-hit Bahamas temporary protected status, a short-term permission to reside in the United States.

Trump told reporters at the White House Monday "we're talking to a lot of different people" about the issue, however he said the United States would need to make sure immigrants from the Bahamas are properly documented.

"We have to be very careful ... I don't want to allow people that weren't supposed to be in the Bahamas to come in to the United States, including some very bad people and some very bad gang members," he said.

Senators from the state of Florida have been asking the president to grant the status to Bahaman residents, a protection that in the past has helped people from Haiti, El Salvador and Honduras, which Trump has been trying to roll back.

U.S. Customs and Border Protection acting commissioner Mark Morgan told reporters at the White House Monday that the United States is expediting its immigration processes for residents of the Bahamas. However, he said immigration officials must still vet all immigrants for possible threats to national security.

When asked about an incident Sunday in which hundreds of storm survivors were prevented from boarding a ferry in the Bahamas because they lacked U.S. visas, Morgan said the situation was a mistake and the result of "some confusion." He said "If your life is in jeopardy you will be allowed in, if you have documents or not."

On the ground in the Bahamas, rescue workers continued their task of searching for bodies and survivors amid the destruction of Hurricane Dorian.

Police said Monday the current death toll from the storm is 45, but expect the number of fatalities to keep rising as more bodies are discovered.

"There are many more persons presumed missing and we are appealing to the public to file Missing Persons reports," police said in a statement late Sunday.

Hundreds, if not thousands of people are believed to be missing following the storm, which struck a week ago as a Category 5 hurricane with winds of up to 320 kph.

Dorian is now over the North Atlantic, but before it moved out to sea it got in its last licks in Canada.

The storm battered the Canadian Maritime provinces and far-eastern Quebec with tropical storm force winds, tearing off the roofs of homes and buildings, uprooting trees, and knocking out power to hundreds of thousands.

No Canadian storm deaths have been reported.

Over 650,000 Indians evacuated from abroad amid pandemic

Russia's nuclear policy remains "defensive." However, a number of new conditions have been set for when a strike can be ...

Bahrain to execute two men 'convicted as result of torture'

MANAMA, Bahrain - The High Court of Bahrain has upheld death sentences against two pro-democracy activists who were charged and ...

Elvis's grandson dead at the age of 27, reportedly shot himself

Jail time for man who ripped off thousands of U.S. troops and veterans

SAN ANTONIO, Texas - A man who hacked into the U.S. military's databases and stole personal information relating to thousands ...

Humanitarian aid to continue after UNSC pact on access points

NEW YORK, New York - Sanity prevailed on Saturday as last minute efforts to stitch up a renewal of the ...

The COVID-19 pandemic's toll on economic activity in recent months is only the beginning of the story. While the rapid ...

SYDNEY, Australia - Stocks advanced on Monday in a positive start to the week.The big action was in Tokyo where ...

UK to spend hundreds of millions of pounds on border infrastructure