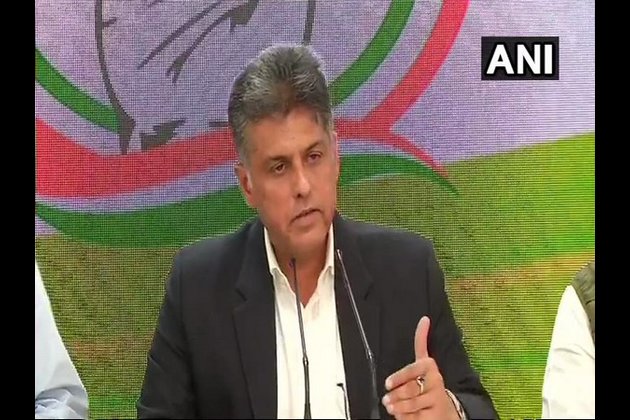 New Delhi [India], Oct 10 (ANI): Senior Congress leader Manish Tewari on Thursday criticised the central government after China while issuing a joint statement with Pakistan stated that it is "paying close attention to the current situation in Jammu and Kashmir".

Following Chinese President's comments on Kashmir, India in a quick response asserted that it is not for other countries to comment on "internal affairs of India".

External Affairs Ministry spokesperson Raveesh Kumar said India's position has been consistent and clear that Jammu and Kashmir is an integral part of India.

A joint statement released by China and Pakistan on Wednesday following a meeting between Khan and Xi said that Beijing is "paying close attention to the current situation in JammuKashmir" and that the matter should be "properly and peacefully resolved based on the UN Charter, relevant UN Security Council resolutions and bilateral agreements.""China opposes any unilateral actions that complicate the situation. The two sides underlined that a peaceful, stable, cooperative and prosperous South Asia was in common interest of all parties. Parties need to settle disputes and issues in the region through dialogue on the basis of equality and mutual respect," the statement said.

It came ahead of Xi's visit to India for an informal summit with Prime Minister Narendra Modi on October 11. (ANI)

BEIJING, June 5 (Xinhua) -- Beijing will lower its emergency response to the novel coronavirus epidemic from the second level ...

75% of consumers in UK, Australia and U.S. slam Chinese government

LONDON, UK - More than 75% of consumers in the UK, US and Australia blame the Chinese government for the ...

JERUSALEM - The only Palestinian industrial area in East Jerusalem is to be demolished, and the present occupiers of the ...

CHRISTCHURCH, New Zealand - New public housing that will save tenants money in energy bills, and provide warmer, healthier and ...

ROME, Italy - Global food commodity prices fell for the fourth consecutive month in May as the coronavirus (COVID-19) epidemic ...

SYDNEY, Australia - Stocks in Asia advanced on Thursday but gains were limited, and not universal.China's Shanghai Composite finished flat.The ...