China Hits Back at US for Criticizing Corridor Project With Pakistan 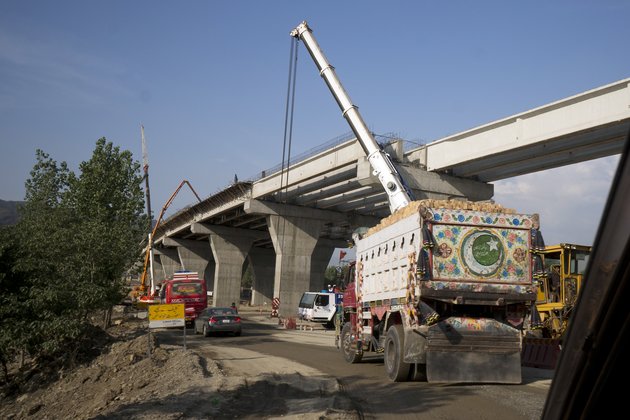 ISLAMABAD - China and Pakistan urged the United States on Friday "to sift fact from fiction" before questioning their bilateral infrastructure development program, which Beijing is funding under its global Belt and Road Initiative (BRI).

The reaction came a day after a senior American diplomat spoke critically of the multibillion-dollar collaboration, known as the China-Pakistan Economic Corridor (CPEC), and warned it would eventually worsen Islamabad's economic troubles and benefit only Beijing.

Speaking to an audience at the Woodrow Wilson International Center for Scholars on Thursday, Alice Wells, acting assistant secretary of state for South and Central Asian affairs, said the U.S. offered a better model that would improve the fundamentals of Pakistan's troubled economy. She also raised questions about the transparency and fairness of CPEC projects as well as related Chinese loans Islamabad has received.

Her remarks drew a strong response from Chinese and Pakistani officials on Thursday.

"I would like to remind my American colleague that if you are really making this kind of allegation, please be careful, show your evidence, give me evidence; we will take action," Yao said while addressing reporters.

He said China and Pakistan are determined to ensure the infrastructure project is free of corruption.

The Chinese diplomat said CPEC is open to investment from anywhere in the world and China would happily welcome U.S. investment in it. Yao described Wells' remarks as astonishing, saying he had personally briefed her twice on the program during her recent visits to Islamabad.

Meanwhile, Pakistani Senate Foreign Affairs Committee Chairman Mushahid Hussain described the allegations by Wells as disappointing. He noted that CPEC has ensured energy security for Pakistan and set the stage for an "industrial revolution" in the next stage of the massive project, which is already in progress.

"CPEC is central to Pakistan's future and it's a pivot of our strategic relationship with China and for which Pakistan has benefited already. We feel she had got her facts mixed up because of unfounded media reports. So, I think it is important to sift fact from fiction," Hussain said.

Beijing has invested around $20 billion in Pakistan over the past five years to help upgrade and build ports, roads and power plants, effectively ending nationwide crippling electricity outages.

Most of the money has come as direct foreign investment, while some has been in the form of soft loans and grants. The overall investment of CPEC is estimated to grow to around $60 billion by 2030.

Critics in the U.S. and elsewhere see China's BRI program as a "debt trap" for countries like Pakistan, which have struggling economies that would make it difficult for them to make Chinese loan repayments. Islamabad's repayments are due in the next few years and analysts say that process will bring the country's depleting foreign exchange reserves under pressure.

Ambassador Yao dismissed those concerns, saying unlike Washington and West-governed lenders like the International Monetary Fund, Beijing does not offer or suspend financial loans for "political" reasons.

"China will never ever ask for these loan repayments as long as you are in need of this money. If Pakistan needs it, we keep it here," he told the audience.

Yao took issue with the U.S. for questioning Chinese aid or loans he said were meant only to help partner nations to improve and stabilize their economies.

"The United States is the biggest loan taker from the world, and even China gave them in credit about $3 trillion," said the Chinese envoy.

Wells noted, however, that even if loan payments are deferred, they are going to continue to hang over Pakistan's economic development potential to hamper Prime Minister Imran Khan's reform agenda.

She said CPEC relies primarily on Chinese workers and supplies, noting that local industry does not benefit from the initiative and that CPEC is not addressing the issue of rising unemployment in Pakistan.

Yao rejected the assertions, saying CPEC has provided more than 75,000 direct jobs to Pakistani workers and is expected to create as many as 2.3 million jobs by 2030.

The Chinese envoy said the project will have built several special economic free zones by then, enabling Pakistan to improve the quantity and quality of its exports to bring home much-needed dollars to boost its foreign exchange reserves.

Yao criticized Wells for using reported estimated costs of certain projects in her speech. He said those projects were still under discussion and their final cost had not been determined.

The sculpture "Stand Tall, Stand Loud", conceived by the African American artist Aaron Bell, whose father once was a prominent ...

KUWAIT City, KUWAIT - Kuwait's ruling Emir Sheikh Sabah al-Ahmad al-Sabah has passed away on Tuesday in a hospital in ...

In the hours after U.S. Supreme Court Justice Ruth Bader Ginsburg died, shocked Americans speculated about whether or not Republican ...

United States considering walking away from embassy in Baghdad

BAGHDAD, Iraq - The United States is threatening to close its embassy in Baghdad amid frustrations over attacks by Shi'ite ...

Trump wants Biden to be tested for drugs prior to debate

U.S. stocks dip as all eyes on presidential debate

International freight depressed due to lack of planes in air

Global stocks rebound runs out of steam on Asian markets

SYDNEY, NSW, Australia - The worldwide rally in stocks of the previous 24 hours came to a halt in Asia ...

Criticism mounts in China over 'bullying' of social media platform

Fifth most visited city in world prepares for long Winter

SINGAPORE - These days, the desolate streets and shuttered businesses in popular tourist areas in Singapore like Little India and ...

SYDNEY, NSW, Australia - Stocks in Japan and Hong Kong rose strongly on Monday, while in China and Australia stock ...