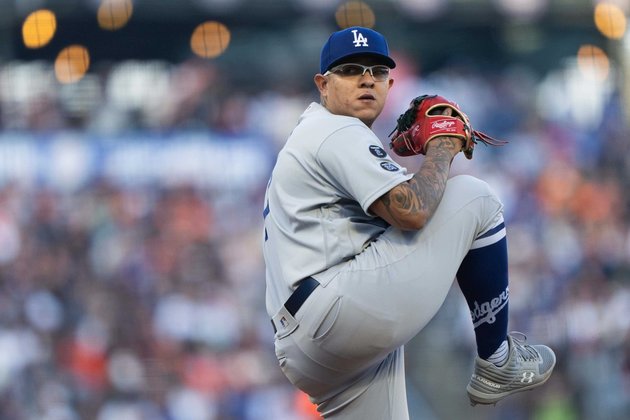 In a Los Angeles Dodgers rotation with stars Walker Buehler and Max Scherzer, it is left-hander Julio Urias who leads the major leagues in wins.

Urias will get a chance to add another victory Wednesday night at home when he faces the Arizona Diamondbacks.

The game will come one day after the Dodgers (93-53) clinched their ninth consecutive playoff appearance with an 8-4 victory over the Diamondbacks.

This is the first time Urias, already in his sixth season, has been a starter for a full 162-game schedule, and he is making it count with a 17-3 record and a 2.98 ERA in 28 outings. He is one of 11 qualified major-league starters with an ERA under 3.00.

Urias figured to have confidence this season after becoming something of a Dodgers hero in last year's postseason.

"I just have to keep pitching," Urias said. "In previous years, I didn't have the opportunity to pitch every fifth day. I just had to wait for my next opportunity. I also think the confidence the team gives me is something that has me on the right path."

After Tuesday's game, Arizona manager Torey Lovullo named right-hander Merrill Kelly (7-9, 4.30) as his starter for Wednesday. Kelly will try to help the Diamondbacks (47-98) avoid a three-game sweep by the Dodgers. Arizona is just 2-13 against Los Angeles this season, including 1-8 at Dodger Stadium.

On Tuesday, Arizona went with Ketel Marte as the starter at second base for the first time this season as Jake McCarthy got a chance to start in center field in just his 11th game and eighth start. Marte was primarily an infielder before moving to center field this season.

The old/new look on defense appeared to give him life on offense, as Marte hit a three-run home run Tuesday and finished with three hits.

"You might see it a couple more times," Lovullo said. "I wanted to see how Ketel would react as an infielder. He takes ground balls. He's played in several games there, and he's been making some subtle hints that he'd be interested in something like that. I listen. These guys think I'm not logged on, but I listen to a lot of things that are said in their vicinity."

The Diamondbacks lost rookie Seth Beer to a dislocated left shoulder Tuesday when he tried to make a diving stop at first base. Lovullo said no decision has been made if Beer will be placed on the injured list.