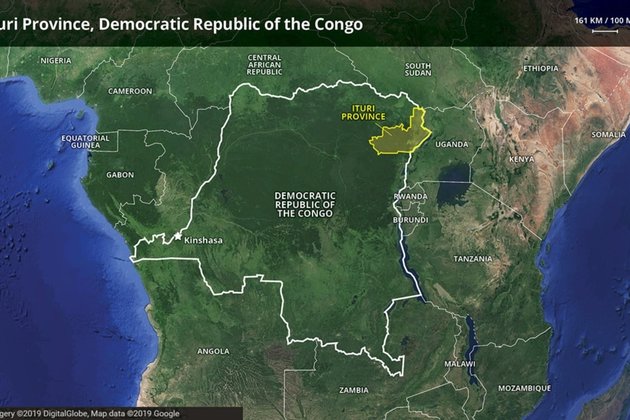 BENI, DEMOCRATIC REPUBLIC OF CONGO - Two Chinese nationals have been killed and an unknown number of other people have been kidnapped in an attack by the CODECO militia on a mining camp in eastern Democratic Republic of Congo, an army spokesman said Thursday.

A local chief and a civil society leader also confirmed the two deaths and said eight other Chinese people were missing after Wednesday's attack. They also blamed CODECO, one of an array of armed groups active in the area.

The attack took place in Djugu, in Ituri province, where Chinese nationals have informal gold mining operations. 'We confirm that CODECO elements attacked one of our positions in Djugu territory. They also attacked a base of our Chinese brothers, unfortunately killing two of them and kidnapping others,' said Lieutenant Jules Ngongo, spokesman for the army in Ituri.

The CODECO militia could not be reached for comment. The Chinese embassy in Kinshasa also could not be reached. The United Nations says repeated attacks by CODECO have killed hundreds of civilians in Djugu territory since 2017 and forced thousands to flee their homes.

About 20 people were killed in an attack on displaced civilians in Djugu territory Sunday night, which the government also blamed on CODECO.

CODECO's fighters are drawn mainly from the Lendu farming community, which has long been in conflict with Hema herders. Wednesday's attack was the second on a Chinese mining operation in a week in Congo's restive east. Authorities said Sunday gunmen had killed a policeman and kidnapped five Chinese nationals near a mine in South Kivu province.

After decades of work, Egypt to open 3,000-year-old Avenue of Sphinxes

CAIRO, Egypt: Egypt opened its 3,000-year-old Avenue of Sphinxes to the public this week, in a swanky ceremony, after over ...

SINGAPORE: Three months after Cambodia rolled out COVID-19 vaccines, just 11 percent of its population had received at least one ...

El Salvador plans to locate Bitcoin city at base of volcano

SAN SALVADOR, El Salvador: El Salvador President Nayib Bukele has announced plans to build a Bitcoin city at the base ...

WASHINGTON D.C.: With agricultural costs being driven to new highs due to a shortfall of nitrogen fertilizer worldwide, farming communities ...

NEW DELHI, India: India will introduce a bill during the winter session of Parliament that could block the use of ...

PARIS, France: In protesting the UK's refusal to grant more licenses to fish in British waters, French fishermen said this ...

WASHINGTON D.C.: To encourage a drop in sky-high gasoline prices, President Biden said the Department of Energy will release 50 ...

Vonage sells to Ericsson for $6.2 billon in merger of tech giants