NBA star to release book on refusal to take knee 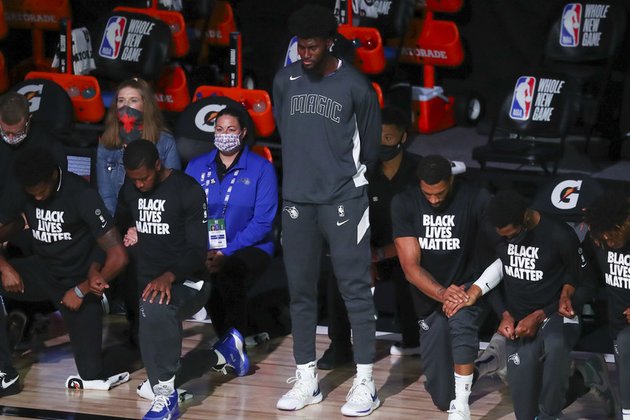 Basketball star Jonathan Isaac has revealed details of a book he is writing alongside conservative pundit Ben Shapiro which will include details on why he refused to take the knee.

The 24-year-old from The Bronx has teamed up with the media company of Shapiro, The Daily Wire, to put together the work titled 'Why I Stand', which will be released on May 17.

As the Black Lives Matter movement gained strength in 2020 after the killing of George Floyd, many NBA athletes took the knee during the national anthem as part of a trend started earlier by NFL outcast Colin Kaepernick as a protest against police brutality.

Sticking to his beliefs, however, Isaac, who is also African-American, declined to join them while citing his Christian faith.

"We're honored to have Jonathan Isaac join us as one of DW Book's first authors," stated Shapiro.

"His faith in God, love of country, and personal courage have already inspired millions of Americans and we cannot wait to share his story with our members and the rest of the world."

As Isaac in a press release, "this book is the story of how my experiences and faith have shaped who I am and my perspective on the world.

"In a time where our country needs men and women willing to stand for freedom of thought, personal medical decisions, and biblical values, courage could not be more paramount.

"In this book, I'm going to tell the story of why I chose to stand," he vowed. "I hope it inspires others to do the same."

The former Florida State alumnus is one of few unvaccinated players in the NBA, where jab rates were reported in December as hovering around 97%.

Unlike with the Brooklyn Net's Kyrie Irving, however, Isaac's absence due to tearing his left ACL and meniscus against the Sacramento Kings in August 2020 means that his stance has not yet made him such a pariah.

"It starts with me personally," Isaac explained in an October interview with The Daily Caller.

"I've had Covid in the past and I feel like I've done a good amount of research that's only getting stronger that suggests immunity from natural infection is just as good, if not better than immunity from the vaccine.

"There's the part about me being healthy. I'm young," Isaac went on.

"This thing is crazy," he remarked as per hysteria surrounding the issue. "It's getting out of hand. I feel like people have been so weaponized and to a degree misguided by the media."