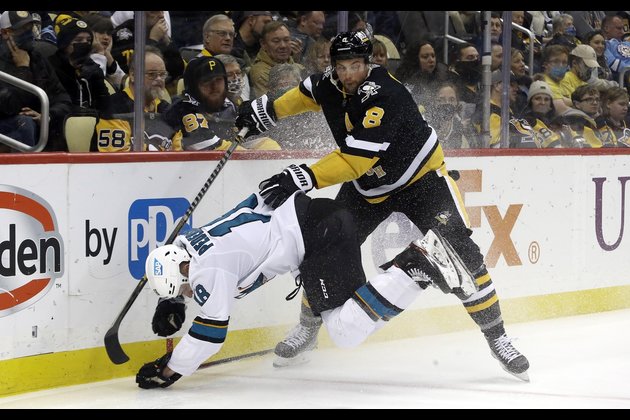 The San Jose Sharks seem to be catching the Pittsburgh Penguins at another bad time.

The Penguins are scheduled to visit San Jose on Saturday, two nights after playing what many concluded was Pittsburgh's worst game of the season.

The Penguins took a 6-2 road defeat against the Los Angeles Kings on Thursday night, giving up three consecutive goals in a 1:23 span of the third after they rallied to tie the score earlier in the period.

"My experience of coaching in this league is when you go through an 80-plus-game schedule, some nights it's a struggle," Pittsburgh coach Mike Sullivan said. "This was one of them."

The Penguins hosted the Sharks on Jan. 2 after sitting idle for two weeks because of COVID-19-related issues. Pittsburgh's eagerness to get back on the ice was evident in an 8-5 win.

The Sharks also will be looking to play considerably better after losing 3-0 to the visiting New York Rangers on Thursday.

Before that, San Jose had won three in a row, with two of the victories coming in overtime.

San Jose has been struggling to consistently hit the net since before the holidays, scoring two goals or fewer during regulation in nine of its past 12 games.

Timo Meier has been a bright spot for the Sharks again this season, leading the team in assists (24) and points (39).

He was named to the All-Star team for the first time in his NHL career on Thursday.

"He's been our most consistent offensive player all year," San Jose coach Bob Boughner said. "He's bought in and he's having success and it's great to see. To get to that level that he's at right now, he's a tough player to play against every night."

The Sharks likely will be without Alexander Barabanov, a top-six forward who entered the NHL's COVID-19 protocol on Wednesday.

San Jose welcomed Nick Bonino back from protocol against the Rangers, however, and also got Rudolfs Balcers back from a lower-body injury that sidelined him for 13 games.

The Penguins should also be getting some reinforcements up front.

Brock McGinn cleared protocol on Thursday. He was available against the Kings, but Sullivan didn't want him in the lineup after he'd been isolated in a hotel room in Dallas for five days.

McGinn has nine goals and four assists in 33 games.

Jason Zucker is also close to returning from a lower-body injury that's kept him out of all six games since the NHL's two-week pause.

Zucker participated in the morning skate before the Kings game wearing a regular jersey. Pittsburgh did not practice on Friday, so his status for the San Jose game was to be determined on Saturday.

Zucker has four goals and seven assists in 30 games this season.

Pittsburgh's Bryan Rust entered protocol on Jan. 8 and had not yet tested negative as of Friday.

The Penguins will remain without two other forwards, Zach Aston-Reese and Danton Heinen, who went into protocol on Tuesday, as well as backup goalie Casey DeSmith.

SOLOMON ISLANDS: In a move that opponents said is aimed at controlling and censoring the media, the government of the ...

WASHINGTON D.C.: In July, a Florida man was killed by exploding Takata airbag inflators, possibly becoming the 20th death in ...

After series of assassinations, Israel says it has eliminated all IJ leaders

Israel has launched an unprovoked war against the Palestinian resistance group Islamic Jihad. The Israeli army assassinated a high-ranking commander ...

EAST NUSA TENGGARA, Indonesia: Hundreds of Indonesian tourism workers went on strike this week to protest a sharp rise in ...

NASSAU, Bahamas: A team of explorers have announced that they have uncovered a treasure, including coins, gemstones and priceless jewels, ...

Survey of economists says 2022 Turkey deficit could grow to $40.2 bln

ISTANBUL, Turkey: Turkey's current accounts are expected to record a deficit of $3.4 billion in June and end the year ...

SYDNEY, NSW, Australia - Stocks in Asia were mixed Tuesday while in the Pacific, markets rose. The scene mirrored events ...

DHAKA, Bangladesh: Bangladesh raised fuel prices by some 50 percent this week, which is aimed at reducing the country's subsidy ...

NEW YORK, New York - U.S. stocks closed mixed on Monday as investors fret about CPI data due to be ...

RICHMOND, Virginia: Dominion Energy Virginia has received state approval to build an enormous offshore wind farm off the coast of ...

Miracle in Milan (Miracolo a Milano)