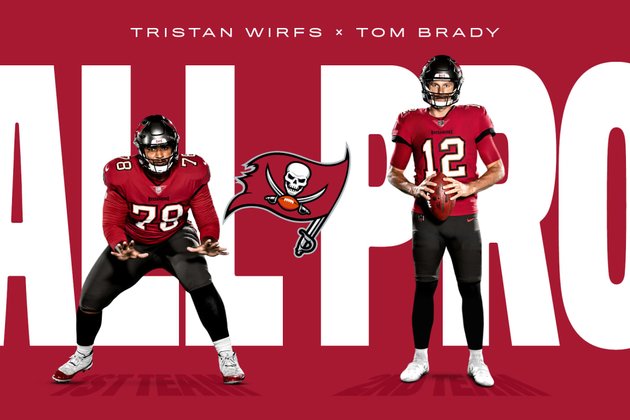 The Associated Press revealed their 2021 All-Pro team on Friday and it includes two Tampa Bay Buccaneers: tackle Tristan Wirfs and quarterback Tom Brady. Wirfs was named to the first team and Brady to the second team.

Both Wirfs and Brady were among the five Buccaneers named to the Pro Bowl in December, but this is an even more exclusive honor. The Associated Press only selects 11 players each on offense and defense from the entire NFL for the first team, and then another 11 each for the second team.

Moreover, this honor for Brady and Wirfs breaks new ground in Tampa Bay franchise history. Wirfs is the first Buccaneers offensive lineman ever to earn first-team All-Pro honors from the Associated Press. Brady is the first Buccaneers quarterback ever to win either a first or second AP All-Pro nod. The most recent Tampa Bay player to win first-team honors was running back Doug Martin in 2015. Linebackers Lavonte David and Devin White were both placed on the second team last year.

Wirfs, the 13th-overall pick in the 2020 NFL Draft, earned the honor in just his second NFL season. Playing every snap at right tackle, he anchored an offensive line that allowed the fewest sacks in the NFL (23) despite the Buccaneers throwing a league-high 731 passes. Tampa Bay's 3.15% sacks-allowed-per-pass-play figure also led the NFL. Wirfs, center Ryan Jensen and left guard Ali Marpet were all selected for the Pro Bowl. According to Pro Football Focus, Wirfs has only allowed three sacks through his first two seasons, during which he has been on the field for every single offensive snap.

Remarkably, at the age of 44 Brady led the NFL in 2021 in both passing yards (5,316) and touchdown passes (43). He set new Buccaneer single-season records in both categories and finished with the third-highest single-season yardage total in NFL history. Brady also joined Drew Brees as the only quarterbacks in league annals with multiple 5,000-yard seasons. He led the Buccaneers to a team-record 13 wins and finished with a passer rating of 102.1, second in team history to his own mark of 102.2 last year.

Brady has now led the NFL in passing yards in five different seasons, more than any other quarterback in league history. Brady also led the NFL in pass attempts (719) and completions (485), the latter establishin a new NFl record. The 2021 season marked the second time that he has led the league in both yards and touchdowns, as he joins Brees and Dan Marino as the only players to accomplish that feat more than once.