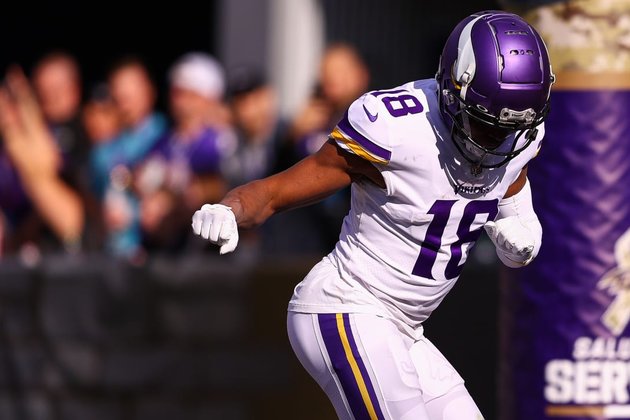 The Vikings wide receiver was named an All-Pro by TheAssociated Press on Friday,

landing a Second-Team spot for the second straight season.

Jefferson was joined on the Second Team by Bengals rookie Ja'Marr Chase, who teamed with Jefferson at LSU.

Jefferson took the league by storm in 2020, posting a then-Super Bowl-era record with 1,400 receiving yards. Chase topped that mark with 1,455 this season.

The 22nd overall pick of 2020 was even better in his second season, topping his rookie numbers in key categories.

Jefferson hauled in 108 receptions, which ranked fourth in the league. He is tied with Michael Thomas for the most receptions (196) in a player's first two NFL seasons.

He also racked up 1,616 receiving yards - the second-most in the NFL in 2021 - and fell just short of Randy Moss' single-season record of 1,632 yards that was set back in 2003. Moss, Jefferson and Chase are the only rookie wide receivers to make the All-Pro team at their position since 1984.

And Jefferson scored 10 touchdowns, a career-best as he was one of just eight pass catchers to find the end zone 10 or more times in 2021.

He dazzled this past November, catching 24 passes for 464 yards and three touchdowns as he earned NFC Offensive Player of the Month honors.

His best performances came in back-to-back November wins against the Chargers and Packers, victories that helped keep the Vikings in the NFC playoff picture at the time.

Jefferson tied his career-high with nine receptions against Los Angeles, totaling 143 receiving yards in a 27-20 road win. He then dominated the Packers at home with eight catches for 169 yards and a pair of touchdowns, an outing that earned him NFC Offensive Player of the Week honors.

He then set career bests in catches (11) and yards (182) against the Lions in Week 13, also finding the end zone in Detroit.

Jefferson said after Sunday's season finale that he isn't content with the success he's had to this point.

"I mean, this is only my second year. There's so many things that I have to learn, have to experience, so this is only the start for me," Jefferson said. "I'm only just reaching the top. A lot of these other guys, six years in, seven years in, and being at the top of the league, and it's my second.