Hurricanes and Rangers try to keep lighting the lamp 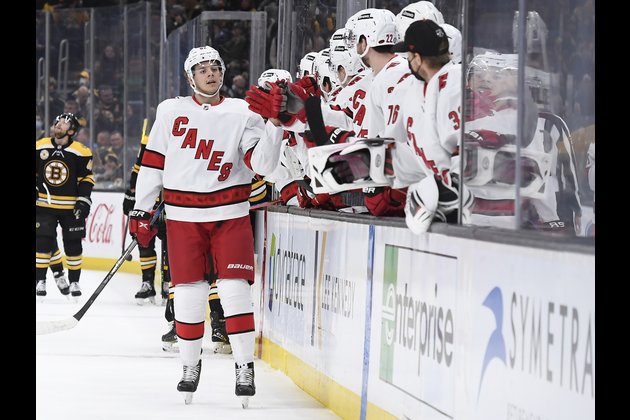 The Carolina Hurricanes and New York Rangers flexed their muscles in their last outings by matching their top offensive performances of the season.

Friday night, the Hurricanes and Rangers aim to keep the scoreboard operator busy when the Metropolitan Division rivals meet in Raleigh, N.C.

Jesperi Kotkaniemi scored twice as Carolina erupted for five goals in the first period en route to a 7-1 thrashing of the Boston Bruins on Tuesday. The Hurricanes, who improved to 11-2-1 in their last 14 games, also netted seven goals in beating the Columbus Blue Jackets on New Year's Day.

"Our mindset coming into the game was in the right spot from the beginning," said Carolina forward Derek Stepan, another former Ranger. "This was one of the good games that right from the start, we did a lot of the things we wanted to. That's what you need on a consistent basis. Nothing changes going into the next one."

While the Hurricanes enjoyed a strong start, the Rangers relished a solid finish in their 6-3 victory over the Toronto Maple Leafs on Wednesday. New York scored three times in the third period to secure its third straight win and seventh in nine games.

"I was a little worried, to be honest with you," Rangers coach Gerard Gallant said. "We came out a little sleepy, obviously. Just seems that when you get back from those road trips, for whatever reason, the first period is tough. It was a tough one."

The Rangers, who also scored six goals in a win over the Chicago Blackhawks on Dec. 7, have ascended to the top of the Metropolitan Division.

"It shows that we can hang with the big boys -- that we are one of the big boys," fourth-liner Ryan Reaves said following his unlikely two-goal performance. "We've got to keep beating the playoff teams, it's something we've talked about. But I think we're proving to the league, we're proving to ourselves, that we're a contender."

Chris Kreider scored his team-leading 25th goal and sixth in his last seven games on Wednesday. He is third in the league in goals and three goals shy of matching his career high, set in 2016-17 and equaled in 2018-19.

Defenseman Adam Fox, who leads the team in assists (35, second most in the NHL) and points (42), has scored two goals and set up four others during his three-game point streak.

Mika Zibanejad had a pair of assists to extend his point streak to six games (three goals, four assists). He has 16 points (nine goals, seven assists) in his last dozen games.

Igor Shesterkin likely will get the nod in goal for New York after securing a win in nine of his last 10 games. The 26-year-old Russian turned aside 27 of 29 shots to win his lone career encounter against Carolina.

Carolina will aim to stay hot with Frederik Andersen, who posted his 20th win in just 26 games this season on Tuesday. The 32-year-old Dane sports a 6-2-3 record in 11 career meetings with the Rangers.