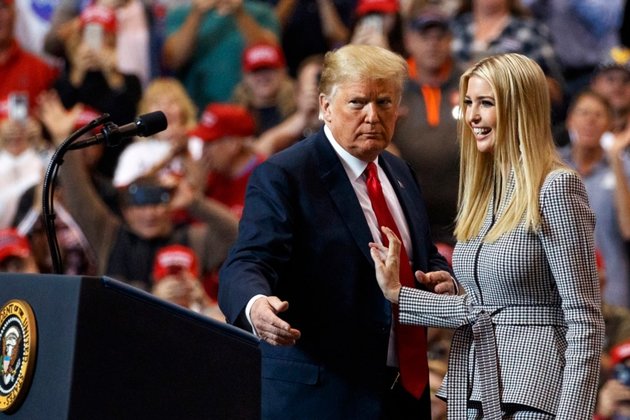 The congressional committee investigating the January 6, 2021, riot at the U.S. Capitol on Thursday asked former President Donald Trump's daughter to voluntarily cooperate with its probe.

In a letter to Ivanka Trump, committee Chairman Bennie Thompson said the panel wants her to tell them what she knows about her father's efforts to thwart congressional certification that he lost the November 2020 election. They also want to know what he was doing as his supporters rampaged through the Capitol while lawmakers were in the initial stages of certifying Democrat Joe Biden as the new president.

It was not immediately known whether the former first daughter would cooperate with the investigation.

Thompson said the committee wants to meet with Ivanka Trump, a White House adviser to her father, because she was in direct contact with him at key moments on January 6, 2021, two weeks before Biden was inaugurated and Donald Trump left Washington.

"One of the president's discussions with the vice president occurred by phone on the morning of January 6th," Thompson wrote in the letter to Ivanka Trump. "You were present in the Oval Office and observed at least one side of that telephone conversation."

The committee also said it wanted to learn about Ivanka Trump's efforts to get her father to call off rioters after they had stormed into the Capitol. At an earlier rally near the White House that day, then-President Trump urged supporters to go the Capitol and "fight like hell" to stop Biden from being declared the winner of the 2020 election.

"Testimony obtained by the committee indicates that members of the White House staff requested your assistance on multiple occasions to intervene in an attempt to persuade President Trump to address the ongoing lawlessness and violence on Capitol Hill," Thompson wrote.

Then-President Trump remained publicly silent for more than three hours about the rampage of hundreds of his supporters at the Capitol but late in the afternoon he released a short video urging them to leave.

As he does to this day, Donald Trump mentioned in the video the false conspiracy theory that he won the election, saying, 'I know your pain; I know you're hurt. We had an election that was stolen from us. It was a landslide election, and everyone knows it. Especially the other side. But you have to go home now. We have to have peace.'

After the Capitol was cleared of protesters, Congress certified Biden's election victory in the early hours of January 7. More than 700 rioters have been charged with an array of criminal offenses, some as minor as trespassing and others with felonies, such as attacking police and vandalizing the Capitol.

The investigative committee has interviewed more than 300 witnesses and issued subpoenas to dozens more. This week, they included Rudy Giuliani and other members of Trump's legal team who filed bogus legal challenges to the 2020 election supporting the former president's false claim that he had been cheated out of a second term.

The U.S. Supreme Court on Wednesday rejected the former president's bid to keep the National Archives from sending hundreds of his White House documents related to the election and day of the riot to the investigative panel.