Braves pull off another walk-off win over Giants 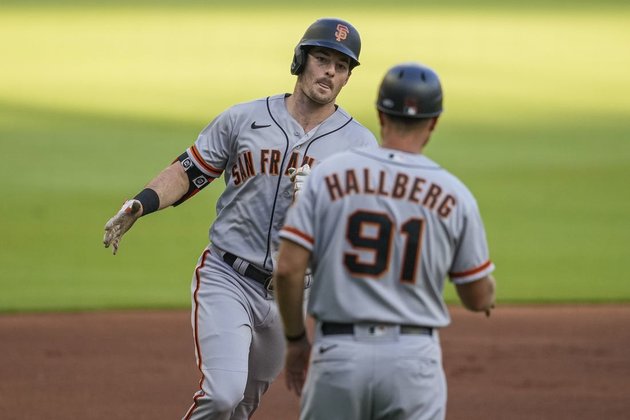 Adam Duvall's two-out single scored William Contreras to complete a three-run, ninth-inning rally and give the Atlanta Braves a 4-3 walk-off win over the visiting San Francisco Giants on Wednesday.

The Braves rallied to tie the game against reliever Jake McGee (1-2). Dansby Swanson led off with a home run, his 10th. Marcell Ozuna singled, aggressively went to second on Matt Olson's long fly ball and scored the tying run on a single by Contreras.

Tyler Rogers entered and struck out Orlando Arcia, but Contreras stole second base and was able to slide home safely ahead of the throw from center fielder Austin Slater on Duvall's hit.

Atlanta also had a walk-off win on Monday and has won two of the first three games of the four-game series.

The Giants scored early on a pair of solo home runs.

The Braves scored a run in the seventh when Ozuna singled and scored on Olson's league-leading 28th double. Olson advanced to third on Contreras' infield out, but was stranded when Giants first baseman Brandon Belt snagged Arcia's liner and Duvall struck out.

The Giants scored in the ninth when Tommy La Stella singled in a run against reliever A.J. Minter for a 3-1 lead. Minter (3-1) got the win.

Atlanta starter Charlie Morton threw seven innings and allowed two runs on three hits, including the two homers, with 11 strikeouts without a walk.

McGee's failure to hold the ninth-inning lead ruined a superb start by Carlos Rodon, who pitched seven innings and allowed one run on three hits, one walk and 10 strikeouts. Rodon saw his consecutive scoreless streak end at 21 innings, but reached double-digit strikeouts for the third time. Rodon did not allow a hit until Arcia's single with one out in the fifth inning.

US sanctions causes 90 percent drop in chips sent to Russia

WASHINGTON D.C.: U.S. Commerce Secretary Gina Raimondo has said that since the U.S. and its allies imposed sanctions on Moscow ...

Tokyo suffers through heatwave, worst since 1875