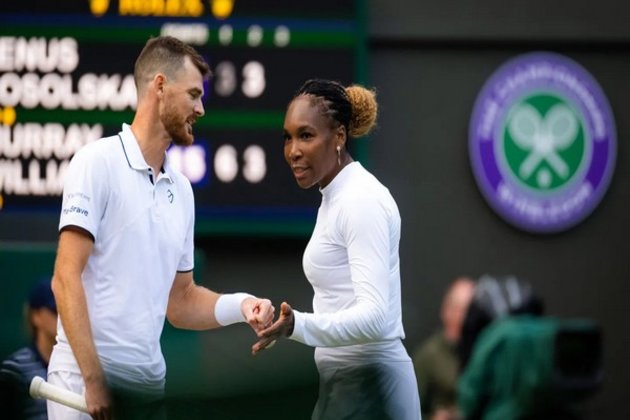 London [UK], July 2 (ANI): Venus Williams and her partner Jamie Murray started their mixed doubles campaign in Wimbledon 2022 with a stunning win over Alicja Rosolska and Michael Venus on Friday.

Williams enjoyed a triumphant return to competition, pairing with Murray to defeat Alicja Rosolska and Michael Venus 6-3, 6-7(3), 6-3 in the first round of mixed doubles.

Williams and Murray will face British wildcards Alicia Barnett and Jonny O'Mara in the second round.

Wimbledon is Williams' first tournament of the 2022 season. The seven-time major champion had not competed in any discipline since playing singles at the Chicago Open last August.

"I think we did a really good job. It was fun. For me, that was what I wanted to get out of it. It was a great experience, playing with Venus Williams. When am I going to get the chance to do that?" Murray said at their joint news conference.

"I was very busy when I wasn't on tour. I think it's easier to be on tour than off tour. I think I should just come on back so I can sleep a little more. I have a lot of work off tour," said Williams.