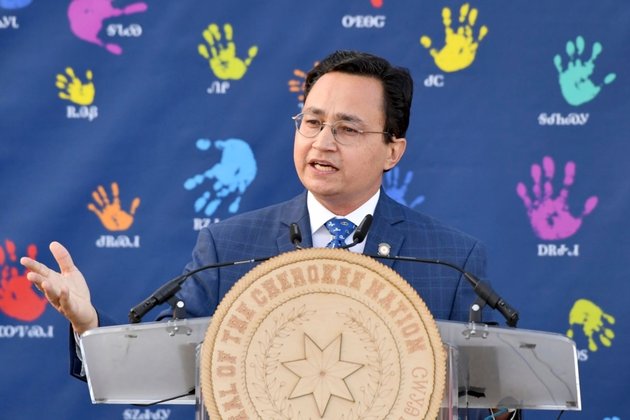 Here is a summary of Native American-related news around the U.S. this week:

The U.S. Supreme Court ruled Wednesday that Oklahoma has concurrent jurisdiction with the federal government to prosecute non-Indians who commit crimes against Indians on tribal land.

The 5-4 decision limited the court's 2020 ruling in McGirt v. Oklahoma, which said a large part of eastern Oklahoma, about 43% of the state, remains Native land, and as such, only federal and tribal courts can prosecute crimes there.

"The State's interest in protecting crime victims includes both Indian and non-Indian victims," Justice Brett Kavanaugh wrote for the court.

Oklahoma Gov. Kevin Stitt celebrated the ruling: "Today our efforts proved worthwhile, and the Court upheld that Indian country is part of a State, not separate from it," he said in a statement.

Tribes in Oklahoma were swift to condemn the ruling as an attack on tribal sovereignty.

In one of the largest transfers of land back to a Native American nation by a state, New York will return to the Onondaga 414 hectares of their original 404,700-hectare ancestral land in Tully Valley.

The agreement is a result of the March 2018 Natural Resource Damage Assessment and Restoration (NRDAR) Program settlement between the Natural Resource Trustees and Honeywell International and will convey the title and full ownership of the land to the Onondaga Nation.

"It is with great joy that the Onondaga Nation welcomes the return of the first substantial acreage of its ancestral homelands," said Onondaga Nation Chief Tadodaho Sidney Hill. "The Nation can now renew its stewardship obligations to restore these lands and waters and to preserve them for the future generations yet to come.'

This week, the U.S. Interior Department announced that Secretary Deb Haaland and Assistant Secretary for Indian Affairs Bryan Newland will visit Oklahoma on July 9 to launch the "The Road to Healing," a yearlong, cross-country tour to give Native American boarding school survivors and their descendants a chance to tell their stories.

Last month, the department released the first volume of an investigative report into the federal Indian boarding school system. So far, the investigation has identified more than 400 federally supported residential schools and more than 50 burial sites.

They found the greatest concentration of these schools was in what is today the state of Oklahoma, with 76 schools representing 19% of the total.

The University of Alaska Southeast (UAS) announced on June 29 that beginning this fall it will offer free classes in three Alaska Native languages, Tlingit, Haida, and Tsimshian languages, at three levels - beginner, intermediate, and advanced.

The free classes are non-credit courses, but credit can be received if a student chooses to pay tuition and fees.

"The University of Alaska Southeast is committed to recognizing and acknowledging historical wrongs endured by Alaska Native Communities. We are making sure Indigenous people don't have to pay to learn their own language. It's so important in the work towards language revitalization and overall healing," said Carin Silkaitis, dean of the School of Arts and Sciences.

OTTAWA, Ontario: Military trainers from Canada will head to the United Kingdom to teach Ukrainians new techniques for fighting the ...