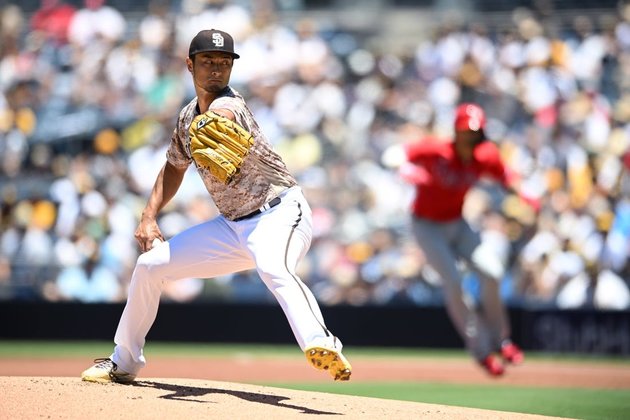 The sight of Yu Darvish on the mound at Dodger Stadium always rekindles a specific memory. and it should be no different Saturday when the San Diego right-hander pitches in Los Angeles.

Darvish had just a short stay with the Dodgers, but it came during the club's World Series run of 2017. That season ended in Game 7 of the World Series when the Houston Astros ended up celebrating a title and Darvish was left holding the loss.

In a World Series that has become known for the Astros' cheating scandal, Darvish gave up five runs (four earned) in a 1 2/3-inning start of the deciding game. The Los Angeles offense was tied in knots, and the Astros finished the night launching champagne corks into the locker-room ceiling.

More sign stealing was suspected. Pitch tipping was blamed. Darvish accepted full responsibility, departed as a free agent to the Chicago Cubs and now is in his second season with the Padres.

Although he is coming off a no-decision against the Philadelphia Phillies on Sunday after giving up three runs in six innings, his ERA is just 1.61 over his past four starts (28 innings). He recorded a season-best nine strikeouts on Sunday, but the Phillies rallied for an 8-5 victory once he departed.

"I mean, he had to battle hard," Padres manager Bob Melvin said of Darvish to the San Diego Union-Tribune. "It was hot out there. What, six innings, three runs, left with a two-run lead? Again, he did his job and it's a game we usually win."

Darvish is 2-3 with a 2.09 ERA in seven career starts against the Dodgers.

Los Angeles will send left-hander Tyler Anderson (8-1, 3.23) to the mound. Riding an effective changeup, Anderson has delivered a steady first half in his first season with the Dodgers.

It has been such a solid season that Anderson did not experience his first loss until Monday at Colorado, when he gave up four runs while matching a season high by allowing 10 hits over six innings.

"I would say overall just too many pitches that caught too much of the plate," Anderson said. "I made some good pitches they got hits on and some other hits that caused the damage were pitches that just didn't get where I wanted."

Dodgers starters have set a high standard in the current series for Anderson to match. Right-handers Tony Gonsolin and Mitch White have combined to give up just two runs over the first two games, both Los Angeles victories.

The Dodgers are now 4-1 against the Padres this season and 2-0 in the current four-game series, the first time the teams have played at Los Angeles in 2022.

Up-and-down on offense of late, the Dodgers got two home runs from Justin Turner on Thursday and long balls from Max Muncy and Cody Bellinger on Friday.

The Dodgers are now 2-0 on a season-long 11-game homestand, with star right fielder Mookie Betts likely to return from a cracked rib at some point next week.