Concentrating on beta cells instead of immune system can help to prevent type 1 diabetes: Research 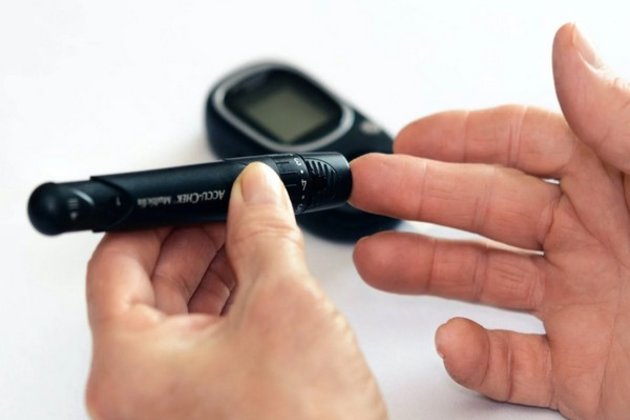 Washington [US], July 2 (ANI): According to new research, the causes of type 1 diabetes focus on auto-immune response, where the immune system shatters the islets of Langerhans which help to control the amount of glucose in the body.

The scientists at the University of Chicago looked at the role of the beta cells themselves in triggering autoimmunity. The study also revealed that there is a possibility that new medications could block the immune system from destroying beta cells and prevent type 1 diabetes from developing in at-risk or early onset patients.

The findings of the study were published in Cell Reports.

The study describes how the researchers used genetic tools to knock out or delete a gene called Alox15 in mice that are genetically predisposed to developing type 1 diabetes. This gene produces an enzyme called 12/15-Lipoxygenase, which is known to be involved in processes that produce inflammation in beta cells. Deleting Alox15 in these mice preserved their amount of beta cells, reduced the number of immune T cells infiltrating the islet environment and prevented type 1 diabetes from developing in both males and females. These mice also showed increased expression of the gene encoding a protein called PD-L1 that suppresses autoimmunity.

"The immune system doesn't just decide one day that it's going to attack your beta cells. Our thinking was that the beta cell itself has somehow fundamentally altered itself to invite that immunity," said senior author Raghavendra Mirmira, MD, PhD, Professor of Medicine and Director of the Diabetes Translational Research Center at UChicago.

"When we got rid of this gene, the beta cells no longer signaled to the immune system and the immune onslaught was completely suppressed, even though we didn't touch the immune system," he said. "That tells us that there is a complex dialogue between beta cells and immune cells, and if you intervene in that dialogue, you can prevent diabetes."The study is the result of a long-term collaboration that began when Mirmira and several members of his lab were at Indiana University. Jerry Nadler, MD, Dean of the School of Medicine and Professor of Medicine and Pharmacology at New York Medical College discovered the role of the 12/15-Lipoxygenase enzyme, and Maureen Gannon, PhD, Professor of Medicine, Cell and Developmental Biology, and Molecular Physiology and Biophysics at Vanderbilt University, provided a strain of mice that was used in the study, which allowed for the knockout of the Alox15 gene when given the drug tamoxifen.In 2012, Sarah Tersey, PhD, Research Associate Professor at UChicago and co-senior author of the new study, led a project that was among the first to suggest that the beta cell might be a central player in the development of type 1 diabetes.

"This allows us to understand the underlying mechanisms leading to the development of type 1 diabetes," Tersey said. "This has been a huge, changing part of the field where we focus more on the role of beta cells and not just autoimmunity."The study also has interesting connections to cancer treatments that harness the immune system to fight tumors. Cancer cells often express the PD-L1 protein to suppress the immune system and evade the body's defenses. New drugs called checkpoint inhibitors target this protein, inhibiting or removing the PD-L1 "checkpoint" and unleashing the immune system to attack tumors. In the new study, increased PD-L1 in the knockout mice serves its intended purpose by preventing the immune system from attacking the beta cells.

In the new study, the researchers also tested a drug that inhibits the 12/15-Lipoxygenase enzyme on human beta cells. They saw that the drug, called ML355, increases levels of PD-L1, suggesting that it could interrupt the autoimmune response and prevent diabetes from developing. Ideally, it would be given to patients who are at high risk because of family history and show early signs of developing type 1 diabetes, or shortly after diagnosis before too much damage has been done to the pancreas. Mirmira and his team are taking the first steps to start clinical trials to test a possible treatment using ML355.

"This study certainly suggests that inhibiting the enzyme in humans can increase levels of PD-L1, which is very promising," Mirmira said. "With beta cell targeted therapeutics, we believe that as long as the disease hasn't progressed to the point that there's massive destruction of beta cells, you can catch an individual before that process starts and prevent the disease progression altogether."The study, "Proinflammatory Signaling in Islet b Cells Propagates Invasion of Pathogenic Immune Cells in Autoimmune Diabetes," was supported by the National Institutes of Health and the Department of Veterans Affairs. Additional authors include Annie Pineros, Hongyu Gao, Kara Orr, Yunlong Liu, Farooq Syed, Wenting Wu, and Carmella Evans-Molina from Indiana University; Abhishek Kulkarni, Fei Huang, and Cara M Anderson from the University of Chicago; Lindsey Glenn and Margaret Morris from Eastern Virginia Medical School; and Marcia McDuffie from the University of Virginia. (ANI)