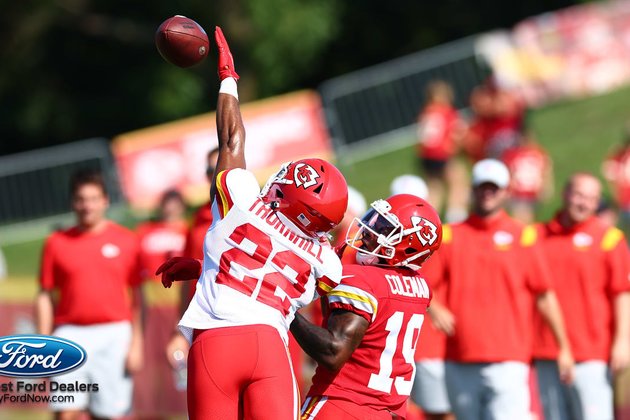 Here are some quick notes from Tuesday’s practiceMatt McMullen

The Kansas City Chiefs took the field for the sixth official practice of training camp on Tuesday in preparation for the upcoming season.

Here's a quick rundown of what took place during Tuesday's practice, and for reference, every previous practice report can be accessed through the links below.

We'll receive an update on Moore, who left midway through practice, on Wednesday. Additionally, tight end Jody Fortson (quad) missed a second-straight practice after leaving Saturday's session early. Head Coach Andy Reid mentioned on Monday that Fortson's injury doesn't appear to be serious and that they're simply giving the veteran tight end some time to heal.

Brown was on the field and participated during Tuesday's practice, marking his first action in this year's camp. Brown spoke to the media following practice to discuss how Day 1 went.

Brown added that in addition to his typical offseason training, he spent a lot of time playing tennis and swimming in order to stay in shape over the last several months. The 26-year-old tackle said that his body feels great.

3. The Chiefs worked on a variety of situations during Tuesday's practice.

Tuesday marked a second-consecutive day in pads, providing the coaching staff with an opportunity to run through a series of real-world situations while the guys were fully suited up. That included short-yardage drills, red zone work and a 9-on-7 period, which emphasizes the running game.

Elsewhere, linebacker Leo Chenal made a great play to stop a rush during the short-yardage period.

4. Safety Juan Thornhill made a great play to prevent a touchdown in the end zone.

Thornhill made one of his best plays of camp on Tuesday, defending a pass in the corner of the end zone during the team red zone period. Thornhill, who was in coverage on wide receiver Corey Coleman, maintained inside leverage before fully extending his left arm and swatting away the would-be score.

It was a great play and a continuation of what has been a strong camp for Thornhill.

It's tough to evaluate the guys in the trenches before the pads are on, but now two days into a padded portion of this year's camp, Jones has been unsurprisingly brilliant. The veteran defensive lineman recorded multiple pressures during team drills, and while pass-rushers aren't allowed to touch the quarterbacks, it's likely both pressures would have been sacks in a game. Jones also stuffed a rushing attempt during team drills in-between those pressures.

These are the days in which you want to see the linemen shine, and Jones didn't disappoint.

The Chiefs will return to practice on Wednesday for another padded practice. For more information on training camp or for a schedule of practices, click here.