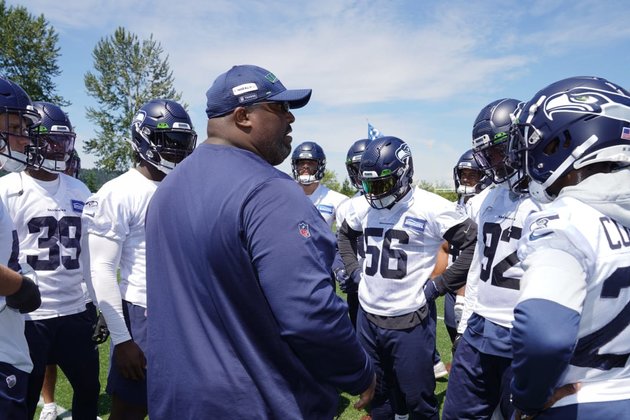 Seahawks Defensive Coordinator gives an early look at his insights as training camp gets into swing.Maliik Obee

Seahawks Defensive Coordinator Clint Hurtt was promoted by the team in February after serving four seasons as defensive line coach. From switching the defensive scheme from a 4-3 to a 3-4 base, to all of the new faces, Hurtt has been busy preparing for the season. Upon sitting down at camp for pressers, Hurtt addressed what he's seeing early from his players, what he expects from them and what Seahawks fans should expect to see.

To whom much is given, much is expected, and Hurtt let it be known that he is prepared to take ownership for the defensive product the Seahawks put on the field.

"I take pride in being a well-organized and detailed person, so it just makes you stay three or four days ahead of schedule with things, and as they come, you have to be ready to roll and adjust," Hurtt said. "I always take pride in trying to keep an even, cool demeanor when I can, when that stuff pops up. So, a lot of it is just staying ahead of the game. You have to have a little bit of foresight for the things that are coming. How people are going to attack you, the things you need to work on, going back through scripts to figure it out, the things that you might be a little short of within a scheme that you have to pick up additional reps of where you're going to get that. When you're coaching d-line or just when you're a position coach, you don't have to worry about that. Now, it's the grand scheme of things. That's the biggest difference."

The University of Miami alum started out as a graduate assistant as his alma mater, graduating to spurts as defensive line coach for Miami, Florida International University, and the University of Louisville before joining the Chicago Bears in 2014. After a season as outside linebackers coach for the Bears, Hurtt joined the Seahawks in 2017, also serving as assistant head coach.

While the Seahawks may be without legendary linebackers Bobby Wagner and recently-retired K.J. Wright, Hurtt is more than confident in the veteran leadership that's stepped up thus far.

"I look at that as a shared responsibility," Hurtt said. "You don't replace people like Bobby Wagner. You don't replace people like K.J. Wright. Those are hard things to do. Obviously, you have great love with Jordyn (Brooks) and the guys that are here where they're going, but it's impossible to replace those guys. So, a lot of times it's going to be start by committee. Between Quandre (Diggs), Jamal (Adams), Brooks, Cody, and the guys up front can handle things with Shelby and Quinton Jefferson, it's really a leadership by committee is what I would say. That's how you have to try to fix those things."

Another veteran leader that stepped up and impressed Hurtt has been 12-year veteran defensive tackle Al Woods, who is currently on his third stint with the team.

"He sets the example for the young guys, 'This is the standard for how we practice,"' Hurtt said. "There are guys, whether it's a young player that we just drafted, the amount of youth we have on this defense, it could be a free agent that we bring from another team, 'You are going to learn the way that we do things. We're not going to adapt to you.' There's a reason why this organization has been so successful for so long with coach (Pete) Carroll, there's a standard of how we do things, and it always starts off with great effort. Al, (Bryan) Mone, those guys embody that, so guys have to understand that's the standard. So, if a 350-pound man can be hauling tail to the ball like that because he's getting himself in football shape, then everybody else needs to be doing the same thing."

Looking to bring a group of 20+ to the game? A limited number of group ticket packages are available to host your friends, family, clients, or co-workers on Seahawks gameday.

A heavy focus of improving the Seahawks defensive play for Hurtt will be the defensive line as a former coach, but that doesn't mean he's ignoring the rest.

"By nature that's always where I want to gravitate towards," He said. "I have a wide back, so I go where other humans are with wide backs just to see what they're doing. I definitely go out of my way to go find the DB's and inside backers and spend some time with them, as well. But naturally, I always try to find the big fellas."

While pointing out the talent on the defensive line, Hurtt takes a moment to reflect on his expectations for the group.

"With the interior guys that we have on the d-line, between Al, Mone, Poona (Ford), Shelby (Harris), and Quinton (Jefferson), there are no excuses," he said. "They should be playing at a high level, that's the expectation, that's the standard, and they've done that, and have practiced really well. Obviously, the guys that we have on the edge in Uchenna (Nwosu), DT (Darrell Taylor), (Boye) Mafe, and Alton (Robinson), those guys have to play at a high level. They have had a nice start to camp, so it's been good."

Hurtt went into detail about his thoughts on what he's seen from his defense at all three levels for several players. When asked about the best athlete on the defense, Hurtt chose third-year defensive end Darrell Taylor.

"You're trying to start a fight in this building aren't you?" Hurtt joked. "I have to stay loyal to the defense. I'll tell you what, Darrell Taylor is pretty unique. I'm going to go with DT, I don't care what anyone says. There we go."

The Draft Network is heavy on the Taylor bandwagon, naming the edge rusher as a breakout candidate for the Seahawks in 2022.

As talented as the Seahawks defense may be, they still have plenty of work to do, and Hurtt has no problem elaborating. One area in particular being red zone defense early in camp.

"It was 50/50, I don't want to give the offense everything," he said. "This is our team, I love it, so I want them to do great all of the time, but for the competitive nature, we will get each other between the white lines, I want to kick their butt every day. There were some good things that were done. Obviously, we have some things that we have to continue to clean up to get on the same page, but that's all in a good day's work."

As we get closer to preseason and ultimately the regular season, Hurtt doesn't have a catchy nickname or slogan for his unit, but he does have a plan. Change can be a great thing.