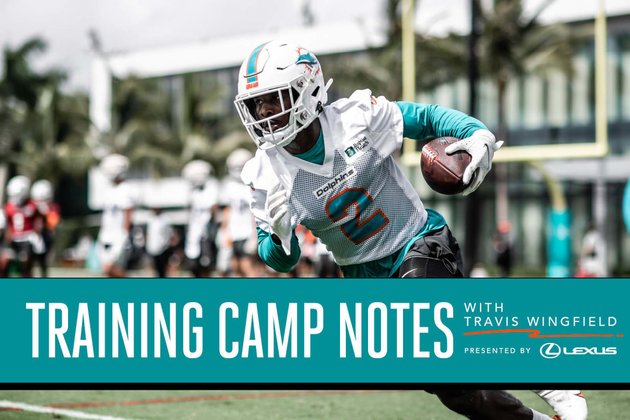 The Dolphins focus to pour resources into the offense this offseason paid practice dividends on Tuesday through multiple avenues. The pass protection performed well against frequent pressure looks, the running backs took advantage of creases created in the run game and the playmakers outside earned the fanfare they've received.

To add to the recipe, a small rookie class is getting opportunities and making the most of them, starting with the team's first two picks in wide receiver Erik Ezukanma and linebacker Channing Tindall. We heard from both rookies about their growth one week into camp as well as a detailed explanation of the challenges of a rookie season from Head Coach Mike McDaniel.

To find the press conferences of Mike McDaniel, Trent Sherfield, Erik Ezukanma, Channing Tindall and more check out the team YouTube page. For more analysis on today's practice, download the Drive Time Podcast with Travis Wingfield - available on Apple, Spotify, or wherever you get your podcasts.

Here are the takeaways from the Day 6 of training camp 2022:

Another day with a handful of touchdown passes, more chunk gains and no turnovers, quarterback Tua Tagovailoa continued to build on a strong start to camp. Today, the defense dialed up the pressure with a handful of blitz looks for the third-year quarterback. Veteran linebacker Duke Riley was impressed by his teammate.

"I think he did a good job and I think it's really good that we're giving him those looks" Riley said. "We obviously as a defense have a lot of looks and we show a lot of different things and we're making it harder for him. I feel like we're giving him some of the hardest things he'll see throughout the season so I think will help him throughout the games and in like-game situations."

Tagovailoa beat a lot of blitzes today. He was making quick decisions, sliding in the pocket to achieve clean throwing platforms and helping his receivers to maximize run-after-the-catch with his location. Placing the ball consistently on the up-field shoulder allowed Miami's decorated skill group to eat up yards.

2. Producing through the rookie learning curve

It was fitting that on the day McDaniel explained the challenges for a rookie in the NFL that fourth-round pick Erik Ezukanma made the biggest play of the day.

Tagovailoa found Ezukanma for a 68-yard touchdown strike. Stepping up into the pocket, Tua soared a pass 40 yards downfield to Ezukanma, who gained enough separation just the ball descended from Tagovailoa into the rookie's waiting arms. Ezukanma finished the play by cutting back and taking it to the end zone. He broke down the play after practice.

"My number was called, I went to the huddle, Tua gave the play," Ezukanma said. "I just self-imagery, went out there and ran the route, it was a beautiful ball and I'm glad I was able to make a play for QB1."

The only player drafted earlier by Miami in 2022 was linebacker Channing Tindall, taken in the third round. Both players discussed the rookie learning curve and their progress early into training camp.

"I draw every play. Every day they give us a script and I just draw every play before I go to sleep just so I can't mentally see it," Ezukanma said. "Then, the next day I read it over before we go out to practice. I do my best day-to-day to grasp the information and go out there and make plays."

"Coach (Campanile) always preaches you're going to make mistakes but not to make the same mistake twice," Tindall said. "That's what I'm focusing on. When I go out there, I'm mentally taking notes. Whatever I have to do to master it; it's just repetition."

Skylar Thompson made plays both on and off-script and had one of his better days of practice. Undrafted linebacker Deandre Johnson picked up a sack and a pressure while fellow UDFA ZaQuandre White scampered for a 10-yard run at one point during the team period.

3. Maximizing creases in the run game

White wasn't the only back finding room to work with. Chase Edmonds and Raheem Mostert both hit daylight for some chunk gains in the running game. Edmonds continues to impress with his decision-making and ability to start at stop at the snap of a finger.

Mostert found some space on a couple of runs and nearly pulled in a long reception on another well-located pass from Tagovailoa.

Both backs ran behind some impressive blocking, including a punishing block from a pulling Robert Hunt to lead the way for the biggest run of the day.

The pass protection has been solid throughout camp and was perhaps at its best on Tuesday. The quarterbacks frequently had time to operate. On the occasional flash from a rusher, the Miami quarterbacks had enough space to step around with the aid of a block. The relationship between the quarterback and the line knowing where to protect was evident.

Trent Sherfield ended Tuesday's practice with a sterling sideline catch on a back-shoulder ball from rookie quarterback Skylar Thompson. After practice, Sherfield, who was with Mike McDaniel in San Francisco in 2021, expanded on the mindset McDaniel offers that has this Dolphins team playing loose, having fun and executing at a high rate through six days of camp.

5. Scheming up the speed

It would be disingenuous to omit the play of Tyreek Hill and Jaylen Waddle simply for the sake of not becoming repetitive, but we're going to repeat the track again.

Hill and Waddle had big days once again catching multiple passes and running for chunks of yards before the nearest defender could converge.

We've always known about the speed, but on Tuesday, we received tangible information about just how fast these guys can get rolling.

"It's funny because every time that Tyreek (Hill) isn't the fastest guy on the practice field, I make a huge deal with the team," McDaniel said. "I build it up like, 'Tyreek, congratulations, man. You've been working so hard. You got third.' (laughter)'Like, we're all so happy for you.' And he gets... but I did it enough where it pushed him to - Tyreek entered into the 23s (miles per hour) which you don't really see that often at practice and all this speed talk is just making him go faster, so write what you will."

For more analysis on Dolphins training camp, download the Drive Time Podcast with Travis Wingfield, available on Apple, Spotify, or wherever you get your podcasts.