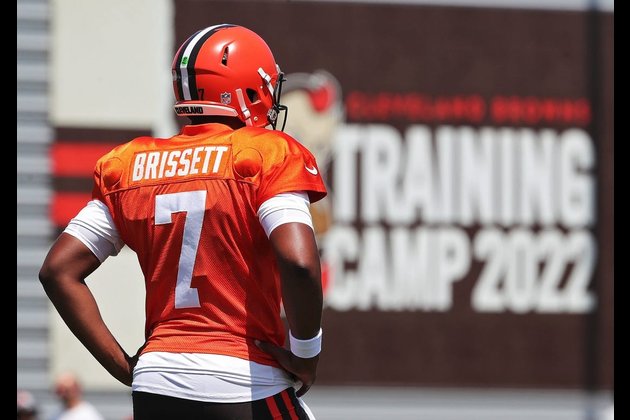 Jacoby Brissett is sliding up from the second chair in the quarterback room again as the Cleveland Browns shift from bracing for Deshaun Watson's ban to preparing to play into October without him.

Brissett, 29, said his preparation won't change a great deal other than the expectation that more of the first-team reps are coming his way with Watson expected to be suspended six games for violating the NFL's off-field conduct policy.

"Since I've been in this league it's been the next man up," Brissett said of getting ready for Week 1 against the Carolina Panthers. "That was the case my rookie year, so that experience helps with not only the playing but with the mindset of understanding that you've got to be ready whenever your number is called."

Brissett brings a wealth of starting experience from his stints with the New England Patriots, Indianapolis Colts and Miami Dolphins. Behind him is former first-round pick Josh Rosen, and the Browns still could add an arm during Watson's suspension.

But head coach Kevin Stefanski said he plans to allow his preparation to remain day-to-day.

"I've just tried to be where my feet are," Stefanski said of the mindset not to get ahead of himself with hypothetical challenges.

But having Brissett makes that possible. He started five games last year as Tua Tagovailoa's backup in Miami and made 30 total starts with the Colts from 2017-20.

"He has a very good way about him," Stefanski said. "Very, very intelligent. Very good leader. Has the ability to make plays on the practice field, help in the meeting room. Be accountable throughout the weight room. He just does all the right things."