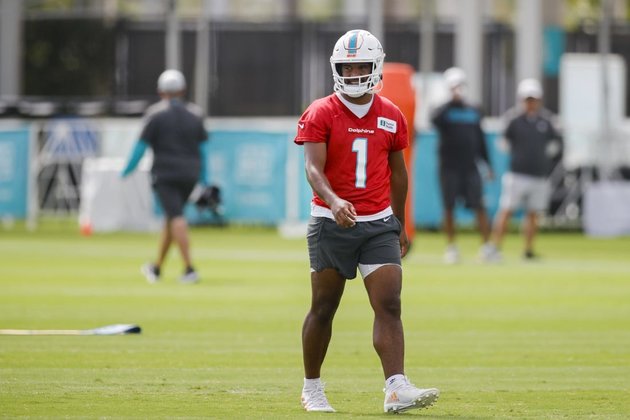 Turf wars are nothing new in the NFL, but joint practices between the Miami Dolphins and Tampa Bay Buccaneers could get interesting next week.

Especially for the quarterbacks.

Tua Tagovailoa is the starter for the Dolphins, who were just docked a first-round draft pick in 2023 and a 2024 third-rounder for tampering. The subject of the team's against-the-rules attraction was Buccaneers quarterback Tom Brady.

An investigation led by former U.S. attorney Mary Jo White on behalf of the NFL found Dolphins owner Stephen Ross had "impermissible communications" with Brady in 2019-20 when he was with the Patriots. The team was guilty of the same after the 2021 season as Brady, under contract with the Buccaneers, plotted retirement and a reported union with Sean Payton in Miami.

"I would say everyone heard about it yesterday when we went into the locker room, seen it on the TV," Tagovailoa, 24, said. "For me, I have no idea about all the details other than what was shown on TV with the $1.5 million fine and then something happening with Brady. I mean, I don't know all the details. I don't even know what happened. But I got to talk to a couple of the guys to kind of find out what was going on, and everyone's wondering the same thing. So not too sure."

It's not the first public indication the highest of higher-ups of the Dolphins were chasing a quarterback to replace Tagovailoa. Former head coach Brian Flores said management -- and specifically Ross -- wanted to acquire Deshaun Watson before the NFL trade deadline in October 2021.

In 21 games as a starter with the Dolphins, Tagovailoa is 13-8 and has completed 66.2 percent of his passes for 4,467 yards with 27 touchdowns and 15 interceptions.

The Buccaneers and Brady, who was not available Wednesday because of a scheduled off day to celebrate his 45th birthday, are sharing the practice field with the Dolphins over multiple days next week.