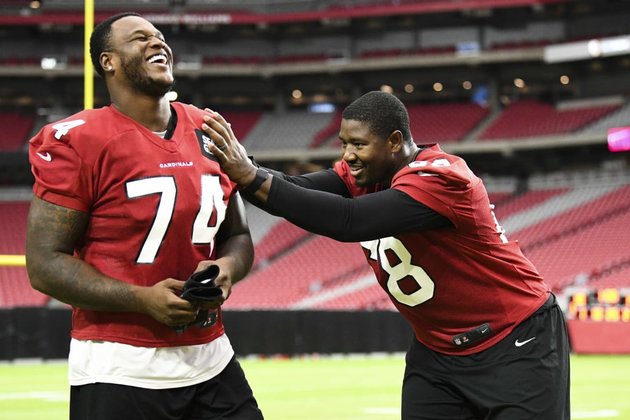 For his new contract, D.J. Humphries hired himself a new agent.

"I'm a very impatient person," the Cardinals left tackle said with a grin Wednesday, after he had signed the day before a new three-year extension with the team through the 2025 season. "That was the hardest part, waiting around, in your mind that it would be a conversation and then it'd be done and then it's multiple conversations."

But Humphries, who turns 29 later this season, wants to expand his business dealings after his football career is over, "so to be able to do one of the biggest deals on my own, that was huge for me."

"I probably wouldn't do it again, but it was fun to do," he added.

Humphries is a long way from his rookie year of 2015, in which he sat inactive every game, a time when he admitted, had it been suggested he would be signing a second contract extension with the Cardinals "I probably would've laughed at you."

Injuries ruined subsequent seasons, and coach Kliff Kingsbury acknowledged that when he was hired, the Cardinals still weren't sure Humphries would make it.

Since Kingsbury's - and offensive line coach Sean Kugler's - arrival, however, Humphries has missed just one game (with Covid) and made his first Pro Bowl.

"He's really taken off and become an integral part of what we do here," Kingsbury said, adding "He's very self-aware, which I appreciate. ... Now he's a team leader and everyone looks to him for energy and confidence."

Humphries practiced for the first time Wednesday after signing his deal Tuesday night. But he insisted he didn't have a "hold-in," a tactic players like Deebo Samuel and DK Metcalf had early in camp - reporting so they didn't get fined, but declining to practice until they received a new contract.

Humphries said he had sat out because "my stomach was hurting." That was what Kingsbury had said previously.

Regardless, Humphries is back on the field now, owner of a deal that is reportedly worth almost $67 million through 2025.

Not bad, Humphries opined, for a guy who has dropped out of the University of Florida twice - once for the draft, and a second time when he false-started an attempt to finish his degree.

Humphries praised GM Steve Keim and owner Michael Bidwill for "fair negotiation through the whole thing," even though he was serving as his own agent.

He figures he'll eventually go back and get that diploma at some point, but he's ready to be a businessman. He's already dabbling in real estate and trucking, but he's looking to be "well-rounded," with a portfolio that will turn his substantial NFL earnings into bigger lifetime earnings.

It's what any good agent would tell his client to do.

"I want to find out what my second passion is, what I'm going to go first-round in in the second phase of my life," Humphries said. "I want to be able to have that freedom."