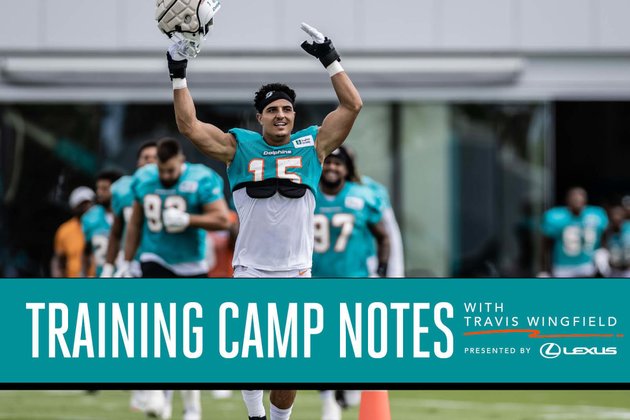 Through the first five days of camp, the wins and losses have been pretty evenly shared by the offense and defense. Tuesday, the offense produced a lopsided victory. Wednesday, the defense bounced back. We'll detail all of the on-field practice happenings as well as some nuggets from the Dolphins offensive staff on another busy day at Dolphins HQ.

To find the press conferences of Tua Tagovailoa, Jevon Holland, the offensive assistants and more, check out the team YouTube page. For more analysis on today's practice, download the Drive Time Podcast with Travis Wingfield - available on Apple, Spotify, or wherever you get your podcasts.

Here are the takeaways from the Day 7 of training camp 2022:

Jaelan Phillips led the way with at least two sacks, possibly a third. He showed the goods in terms of his multiple avenues of applying pressure. Whether he's winning with speed, power, or secondary efforts, Phillips has shown the desired growth so far in his second training camp.

Christian Wilkins was a regular in the backfield. He and Zach Sieler, on a handful of occasions, displayed rare grip strength to engage their man and discard with a powerful tug, and a coinciding slingshot towards the quarterback.

Sam Eguavoen applied pressure from his linebacker position with a sack. Emmanuel Ogbah's relentless motor got him in the backfield for one. Both players also made a handful of plays in the running game, which also went in the defense's favor.

Though the defense got the better of the offense, the offense did hit some timely chunk plays and the occasional home run, including my personal favorite play of camp so far.

The defense showed pressure, Tagovailoa took the snap and immediately threw downfield to a spot. River Cracraft met the ball at its descent 30 yards away and cruised in for a 52-yard score.

"I've been pleased with what he's done," Quarterbacks Coach Darrell Bevell said. "He's not afraid to speak up. He's a lead by example guy. He's going to let his play speak for itself but if he needs to. He's got great rapport for his teammates and I think they have respect for what he's doing."

Wearing the orange jersey, Tagovailoa also displayed his timing and accuracy on a fastball he zipped between a trio of defenders to Jaylen Waddle for a deep red zone touchdown (think Panthers game TD from 2021).

Bevell and Tagovailoa detailed how that precision is trained and developed.

"I've been playing this sport for as long as I can remember since I was little," Tagovailoa said. "That's something my dad would train me to do every time. I'd go out and throw with a teammate, a cousin, whoever it was. My dad would stand and catch for me. An uncle would stand and catch for me. They'd always give me a spot that I had to throw it too. My dad was very adamant at where the ball had to be every time. He made it known after practices and after games. I would say it stuck with me throughout my entire football career in college and then in the NFL."

3. Visualization paying dividends for a pair of rookie receivers

Yesterday, Erik Ezukanma detailed the visualization aspect of his game, and it's working for him. He caught a 50-50 ball during one-on-one's, once again showcasing his physicality and high-point skills. He also found the end zone during deep red zone work late in practice. Dolphins Wide Receiver's Coach Wes Welker explained further about the process of learning he's developed for his rookie wide recievers.

"It was mandatory. Early on in OTAs it's that way for all rookies. That's why I explained to them what I did," Welker said. "I sat there and drew out every single play from the night before that way I'm ready for this play or that play. All that is, is stealing reps. You're sitting there talking yourself through 'I have this route, this play, or whatever it is, I'm motioning to this spot,' trying to dial it in. If you write it out, now you've given yourself a mental rep. (Ezukanma) and Braylon (Sanders) both have been doing that and I think it's really paid off for them because the more you do it, the more it becomes like clockwork so you can just line up and go play, no matter what Mike (McDaniel) calls."

Fellow rookie Braylon Sanders had the media buzzing about his camp so far with another handful of catches to demonstrate his speed, hands and body control. Sanders spoke after practice about the work that goes into making those plays.

"It helped a lot," Sanders said. "Just going over the script the night before you come out here and do it at full speed; it helps you a lot because you hear the verbiage, you know exactly what he's talking about so you're in the right position when it's time to play."

It's tough to tangibly give Howard his due praise in training camp for two reasons. One, his resume has afforded him a place in the load management category as the Dolphins are being selective with the rep counts of some of the team's veterans (Tyreek Hill and Chase Edmonds had a load management day on Wednesday, for instance). The other reason is that, when he is on the field, the ball is not going in his direction very often.

Wednesday, fans at the Baptist Health Training Complex were treated with a Howard-on-Jaylen Waddle matchup. First, a long ball that Howard showed off the recovery speed to get depth and breakup the pass. Later, a shorter route where Howard displayed smooth transition skills to disrupt the throwing lane again.

Once the team period started, Howard was a big part of the defense frequently shutting down the passing game with his work in all facets of the game - man, zone, press, off, all of it.

5. Quarterback of the defense

It happened again. One of those instances where the offense appears to have an imminent explosive play developing before No. 8 does his best Randy Orton impression.

On a intermediate sideline pass from Tagovailoa, Holland ranged over to the sideline and broke up a ball that he nearly intercepted. Earlier this week, Defensive Assistant Pat Surtain called Holland the quarterback of the defense, a pride-filled role that the studious Holland approaches with vigor.

"You just have to know what the defense is, know what it takes, know where the checks are, calls and things like that," Holland said. "Everything that's intertwined in the defense on that specific call. We have a lot of stuff going on. But on that specific play, you only have one defense, one job you have to worry about. As long as I do my 1/11th, boom everybody else is on the same page. If I do my 1/11th and I get the job done inside the play and the play is still going on, I can help other people do their 1/11th It's a trickle down effect."

For more analysis on Dolphins training camp, download the Drive Time Podcast with Travis Wingfield - available on Apple, Spotify, or wherever you get your podcasts.