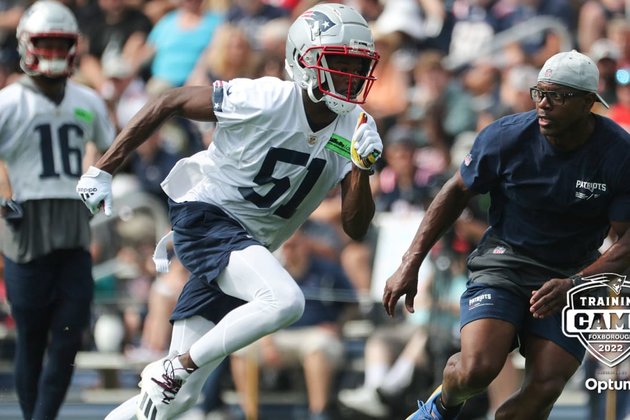 Tyquan Thornton has had a nice start to Patriots training camp, earning continued reps and showing what appears to be daily improvement. As the offense looks to find their footing, Thornton's made some of the highlight plays of camp and has been an exciting bright spot.

"You know, the first week it was kind of difficult for a lot of us, just coming from having that transition from college to the NFL, but I feel like we picked up on it a little bit quicker, but we still got more improvement to make. So every day we're coming out putting our best foot forward," said Thornton following Thursday's fully padded practice, which included a rookie tradition of being sprayed down with a hose by Matthew Slater while trying to recover a loose football.

Thornton enjoyed the wet start to practice, especially on another hot day which the Florida native said felt a bit like home. As he continues to get a crash course initiation to everything Patriots, his speedy potential and attention to detail have been apparent and while everyone was well aware of his blazing speed, his focus has been increasingly on the little details.

"I put a lot of pride into it, coming out every day working on my releases, my combatives, using my hands at the line, trying to be more aggressive, and getting in and out of my breaks real fast," said Thornton.

The rookie is lucky to have Patriots Hall of Famer Troy Brown teaching him the ropes. Now in his fourth season as a coach, and first as the lone receivers coach, Brown's legacy still echoes through the hallways of Gillette Stadium and can serve as inspiration for the players now under his charge.

"It's motivation, getting coached up by him. You can go on YouTube and see the film. He used to put fear in guys' hearts out there," Thornton said of Brown. "He reminds us as receivers, we have to have that mindset going out on the field every day saying that we're going to dominate."

A big part of Brown's game was not only his savvy as a receiver but his versatility and game-changing special teams ability.

"He's a dog. He's probably the only person I know that played the wide out position, the star (slot cornerback) position. Going on defense. Going to block punts. Doing that, that's the true definition of a dog," said Thornton.

Despite limited experience outside of playing on offense, Thornton's arrival in New England includes a requisite embrace of special teams. He's been spotted using his speed as a punt team gunner, where he can quickly get downfield to make a play on the returner.

"Special teams is a big piece of being here at the Patriots," said Thornton. "If there's a way for me to get on the field, you know I'm gonna do what it takes."