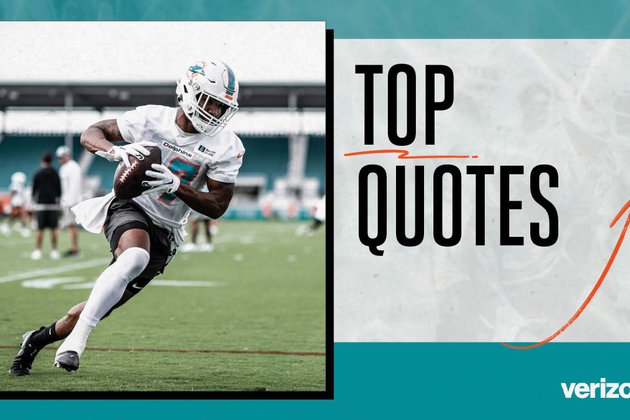 (On how he develops assistant coaches)

"That's an important, important aspect of the job ... That's very important for me, as a leader of the football team, is to make sure that the players are getting resourced by people that are getting better at their craft. To always seek new and different ways to communicate with people and handle those relationships in the best way possible. So I think it's just attention. I think it's positive reinforcement on things that are working. I think it's solution-finding and just really investment into the assistant coaches by myself to improve on things that really don't work."

(On his favorite and/or least favorite parts of joint practices)

"My favorite part is the competition. You've been going against each other for - I mean, shoot, I think it would be like, 120-some-odd days since we started in OTAs or in the offseason program. So that break-up is much needed. So it's very, very useful in that regard where you get to go against an opponent - somebody else - for the first time and that's super valuable. And you get exposure to different schemes on both sides of the ball, which is very valuable moving forward to the regular season. My least favorite part? I guess it's honestly, I love the opportunity for the players in the preseason game. From a coach's perspective, it's kind of annoying because you've kind of used your bullets in practice so you kind of - it is a little challenge to not adjust from practice, which kind of gets you out of the whole process of what you want to show and what you don't want to show. So that whole gymnastics, the fact that we have to play a game, is a very necessary evil that is important to me for the players' opportunity. But from a working day-to-day deal it's kind of annoying from a coach's perspective."

(On the intelligence of S Jevon Holland) - "It has been really, really cool watching Tua (Tagovailoa) and him compete. And that's an odd thing to say, like in regards to a safety versus a quarterback, but he plays all over the place, he communicates the defense from the call from the sidelines and he's a student. I think Tua respects that, and they have kind of a nice competitive bond going. It speaks to how football smart he is, how to - the things that he does on the football field are super exciting for the Miami Dolphins moving forward. He is athletic and has a lot of skills, but none of that even matters if he doesn't have a brain for football and a commitment to football like he does."

"I think that's probably the tough part of the sport or professional sports, is that every day you have to prove yourself. Your career, whatever you've done, it really doesn't matter up to this point. You have to come with it every day, and that's the hard part of greatness and sports success is that consistency. Getting to that level every day, whether I know or you know that I can go out and do it and perform, you have to come with that mentality every day to show and prove."

(On what it is like facing the Dolphins defensive front)

"Man, it's a real active group. Real active group. Highly talented. A lot of skill. Adding Melvin Ingram to that group is, I think, extremely underrated. He's an amazing player and has been that way for a long time. A guy like Christian Wilkins who has been highly productive but hasn't been that notable as far as popularity, he's going to have a - I'm projecting that he has a standout year, more so in the stat line than ever before. (He's an) extremely talented player, intelligent player, real good hands and feet technique. Man, Zach (Sieler), another one - extreme technique. (Emmanuel) Ogbah, I'm a fan of those guys."

"I think just his approach. I think I have a pretty good approach to the game, but his approach every day. He takes every day as a new challenge. He's really a real deal technician when we're in meetings and things like that. He's a true professional. I think I can take that and learn from it."

(On his relationship with QB Teddy Bridgewater)

"Actually, I got to grow a relationship with Teddy outside of the facility this summer. Just me throwing in his neighborhood. You know he's from down here. He's honestly just a great dude off the field more than on the field. Honestly what he does for his community down here and how productive he is around here is inspiring. I think so. As far as on the field, he's the OG. He's going to see the coverage and tell you what he saw and give you his true opinion."

"Oh man, it's been great. We're seeing looks that normally you don't see this early in training camp. It really tests our edges and tests our gap defense, so as long as everyone is doing their job and working hard to improve, that's how we have to approach each day."

"Just his leadership and then the way he attacks each day. You can definitely feel him when he's out there and just watching practice, he makes plays all the time so it's really exciting."