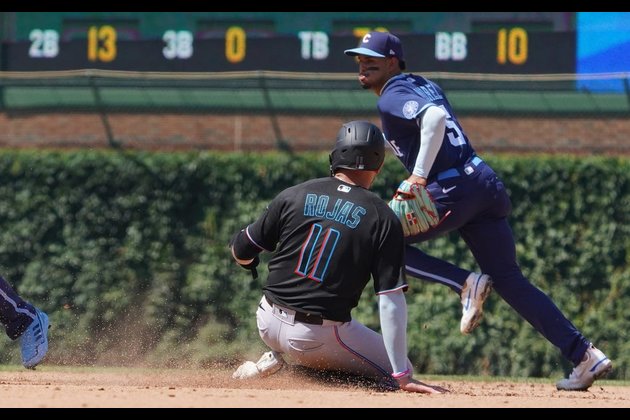 Willson Contreras enjoyed an unexpected return to Wrigley Field on Friday afternoon by hitting a go-ahead two-run homer with one out in the eighth inning as the Chicago Cubs rallied for a 2-1 victory over the visiting Miami Marlins.

Contreras heard a loud ovation from fans after going 5-for-26 on Chicago's seven-game road trip that included Tuesday's trade deadline. Instead of being dealt, Contreras remained a Cub and homered for the first time at home since June 29 against Cincinnati.

Contreras gave the Cubs the lead when he lifted a 0-1 low changeup off Dylan Floro (0-1) and sent the ball about halfway up the left-center field bleachers.

Contreras'16th homer helped Chicago end a five-game losing streak and get its fourth straight home win, a stretch that includes the pending free agent's emotional reaction to the fans on July 26 against Pittsburgh.

It also was one of four hits for the Cubs, who were held hitless for five innings by Miami's Edward Cabrera in his return from missing nearly two months with an elbow injury.

Joey Wendle hit an RBI single with one out in the seventh for the Marlins, who are 5-13 since getting within two games under .500 on July 14. It was the 14th time in this stretch Miami was held to three runs or less.

Cabrera allowed four baserunners. Cabrera also struck out eight and did not allow multiple baserunners in his final four innings.

Cabrera walked two in the first before retiring Ian Happ on a double-play liner, retired the side in the second and third before stranding Happ in the fourth. Cabrera entered the fifth at 67 pitches and needed 11 pitches to finish his outing by retiring rookie Christopher Morel.

It was the third time in four starts this season Cabrera allowed two hits or fewer. He pitched for the first time since June 12 when he allowed five runs in 3 2/3 innings at Houston and was placed on the injured list three days later.