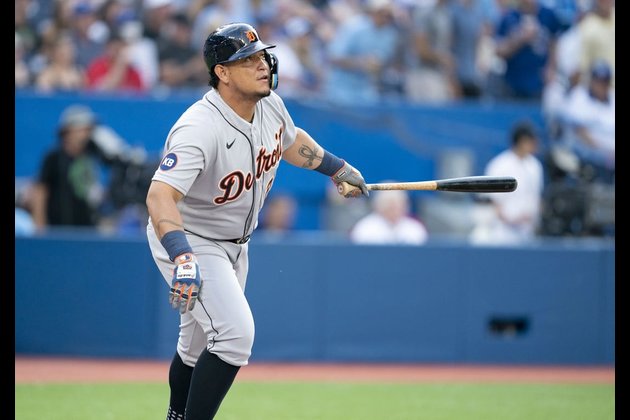 Detroit Tigers star Miguel Cabrera told the Detroit News on Friday that he plans to be back in the 2023 season, one day after he hinted at thoughts of retiring after 2022.

Cabrera has one season remaining on an eight year, $248 million contract. The two-time American League MVP is set to earn $32 million in 2023.

"I'm not going to retire," Cabrera told the newspaper. "Not until after next year when my contract is done. They didn't understand what I said. No way am I going to quit."

Cabrera, 39, has been dealing with persistent right knee pain in recent weeks and told reporters Thursday that "right now we don't know" what his plan would be following the season.

"I've got to talk to my agent, I've got to talk to the GM, I'm got to talk to everybody (and) see what's going to be the plan for next year," Cabrera said in his original comments. "Right now we don't know. We're focused on today. We're going to go day by day and see what happens. I don't think about next year. I'm thinking about trying to finish healthy this year."

A four-time batting champion, Cabrera is hitting .268 with four home runs and 36 RBIs in 91 games for Detroit this year. He recorded his 3,000th career hit on April 23 against the Colorado Rockies. The hit made Cabrera the seventh player in major league history with 3,000 hits and 500 homers.

Cabrera also was named to the All-Star Game by commissioner Rob Manfred as a "legends selection." It marked the 12th All-Star selection for Cabrera.

Cabrera, who was hitless in his past 23 at-bats, was not in the starting lineup for Tigers' Friday game against the visiting Tampa Bay Rays.