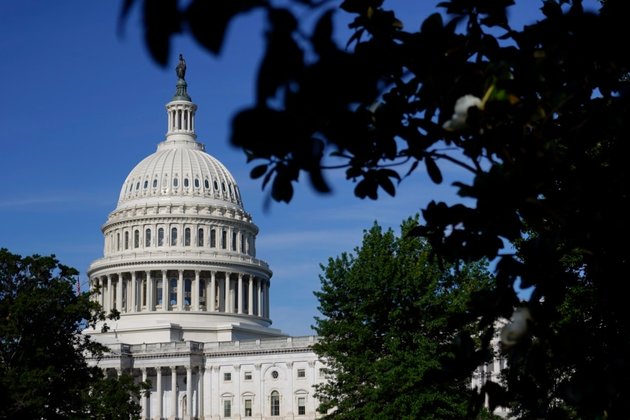 The measure, a scaled-down version of President Joe Biden's long-stalled economic legislative plan, was narrowly approved 51-50, with the tie-breaking vote cast by Vice President Kamala Harris after hours of debate through Saturday night and then extended into a rare Sunday afternoon session.

After casting the deciding vote, she stood and applauded cheering Democrats for passing the legislation. Many of the Republicans, knowing they had lost, had already left the chamber.

Senate Majority Leader Chuck Schumer called it "one of the defining legislative fetes of the 21st century."

"The Senate is making history," he said.

The legislation calls for the biggest U.S. investment ever in attacking the effects of global warming, $370 billion to boost the use of clean energy, encourage Americans to buy electric vehicles and reduce plant-warming emissions 40% by 2030.

The URL has been copied to your clipboard

The legislation would also for the first time authorize the U.S. government to negotiate the cost of some drugs with pharmaceutical companies to potentially lower the cost of medicines for older Americans, extend health insurance subsidies for millions of people and impose a 15% minimum tax on billion-dollar companies that now pay nothing. The bill would also add 87,000 more federal tax agents to further scrutinize individual and corporate tax returns to catch tax cheaters and cut the chronic U.S. budget deficit by about $300 billion.

The measure narrowly survived a key test vote Saturday by a 51-50 margin, also with Harris casting the tie-breaking vote after all 50 Senate Democrats supported the legislation and the 50-member Republican caucus uniformly opposed it. Lawmakers then offered numerous amendments over hours of debate that often failed on predictable 50-50 votes, with neither party budging to support the others proposed changes.

In a statement released Sunday, President Biden said, "I want to thank Leader Schumer and every member of the Senate Democratic caucus for supporting this bill. It required many compromises. Doing important things almost always does.

"The House should pass this as soon as possible and I look forward to signing it into law," the statement said.

Democrats engaged in months of rancorous debate over what was originally a $2 trillion measure, what Biden called his Build Back Better plan. Now, with U.S. consumers worried about the sharpest increase in consumer prices in four decades - a 9.1% annualized surge in June - Democrats called the pared-down legislation the Inflation Reduction Act.

However, the nonpartisan Congressional Budget Office's review of the legislation said the bill's provisions would have a "negligible effect" on inflation during the remainder of 2022 and little effect next year either.

The entirety of the legislation appeared doomed until Schumer, with Biden's approval, was recently able to reach agreement with two centrist Democrats, Senators Joe Manchin of West Virginia and Kyrsten Sinema of Arizona, on tax and climate control provisions in the proposal that they would accept.

As debate opened Saturday, before lawmakers from both parties offered their array of amendments that ultimately failed, Schumer said, "This historic bill will reduce inflation, lower costs, fight climate change, and it's time to move this nation forward."

Now that the Senate has approved the measure, the House of Representatives is expected to interrupt its summer recess and pass it Friday and send it to the White House for Biden's signature.

The debate also played out on Sunday television talk shows.

Democratic Senator Richard Blumenthal of Connecticut, who supported the legislation, told CNN's "State of the Union" show that its passage would give the tax-collecting Internal Revenue Service agency the greatly expanded staff it needs to "go after" tax cheats and "the biggest earners."

He also noted that Americans "overwhelmingly want to cut the cost of their medicine," a provision that could be achieved for some drugs prescribed for older Americans under the country's Medicare health insurance program.

But Republican Senator Lindsay Graham of South Carolina, who opposed the bill, balked at Blumenthal's analysis of the measure, saying that tax agents are "going after Uber drivers and nurses. They're going after everyone."

He said the legislation is "going to make everything worse. It's not going to help [cut] inflation."

51 ℉
Thunder in the Vicinity in Montgomery

HAVANA, Cuba: Three days after Hurricane Ian knocked out electricity throughout Cuba, protests broke out for a second night in ...

FORT MYERS, Florida: Areas within Lee County, including Sanibel Island and Fort Myers, Florida, were devastated by winds, rains and ...

Survey reports 66% of US adults say no to Covid boosters

US to purchase $1.1 billion in arms for Ukraine

WASHINGTON D.C.: Pentagon officials have announced that an arms package has been approved for Ukraine worth $1.1 billion, which includes ...

US acts to reduce risks from space debris

WASHINGTON D.C.: Three years after it restricted Malaysian Airlines from adding new flights to its U.S. route, the Federal Aviation ...

Britain has 'too many' low-skilled migrants, interior minister says

SYDNEY, NSW, Australia - Stocks in Asia moved sharply higher on Tuesday despite markets in Hong Kong and Shanghai being ...