"Desperate and reprehensible.." US condemns Russian attacks on Kyiv 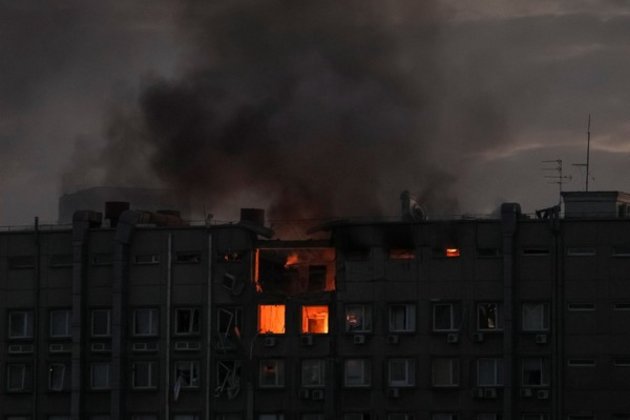 Kyiv [Ukraine], October 17 (ANI): The United States on Monday condemned early morning drone strikes on Kyiv as it rebuked Russia for "reprehensible" attacks against civilians and civilian infrastructure in Ukraine.

"More desperate and reprehensible Russian attacks this morning against civilians and civilian infrastructure. We admire the strength and resilience of the Ukrainian people. We will stand with you for as long as it takes," the US embassy in Ukraine tweeted.

Ukraine's capital city Kyiv was rocked by multiple explosions early on Monday in an attack by "Kamikaze" drones, according to a Ukrainian official. Andriy Yermak, head of the presidential office of Ukraine, said kamikaze drones targeted the city.

"The Russians think it will help them, but these actions look like desperation," Yermak said in a statement, blaming Russia for the attack, CNN reported.

Several residential buildings were damaged in the attack. In a Telegram message, Kyiv Mayor Vitali Klitschko said the "drone attack" caused a "fire in a non-residential building."Kyiv says Moscow has used Iranian-supplied drones in the strikes against major Ukrainian cities in recent weeks and pleaded with Western countries to step up their assistance in the face of the new challenge, CNN reported.

On Monday, at least three explosions were heard in Kyiv at around 6.45 am (local time). One of the blasts was in the Shevchenkivskyi district in the centre of the Ukrainian capital. In order to tackle the situation, emergency services have been sent on-site.

The war between Russia and Ukraine has only escalated after a truck recently exploded on the Crimea road bridge, causing seven fuel tanks of a train heading to the Crimean Peninsula to catch fire. Three people were killed in the blast, which also led to the partial collapse of two spans of the road bridge.

The Crimean Bridge was opened in 2018 by Russian President Vladimir Putin, four years after Moscow annexed Crimea and was designed to link the peninsula to Russia's transport network.

The 19-kilometre bridge, which runs across the Kerch Strait and connects Crimea with mainland Russia, consists of a railway and vehicle sections. It became fully operational in 2020.

Earlier, the transport ministry had said the bridge, which consists of two parallel routes for automobiles and trains, will possibly open to trains by 8 pm Moscow time (1700 GMT) on Saturday. (ANI)

Republicans in Congress to impeach border official due to migrants

WASHINGTON D.C.: In a sign of future political battles over record numbers of illegal crossings under Democratic President Joe Biden, ...

MOSCOW, Russia: Russian state-run TASS news agency has reported that a US woman was detained and fined by a Russian ...

ISLAMABAD, Pakistan - Former President General (retd) Pervez Musharraf died in a Dubai hospital on Sunday at the age of ...

Up to 2,000 Israelis to be housed in new town on Gaza border

JERUSALEM - Israel on Sunday announced plans to build a new town on the Gaza border .The town, temporarily named ...

US cancels over 1,800 flights due to ice storm

CHICAGO, Illinois: After an ice storm ravaged states from Texas to West Virginia, this week, airlines canceled over 1,800 flights ...

Fed fails to cool economy as US sees 517,000 jobs created in January

WASHINGTON D.C.: Despite the efforts of the Federal Reserve Bank to cool the job market to help curb record-high inflation, ...

102,000 job firings in US high tech in December, according to report

WASHINGTON D.C.: A report released this week detailed how, in January, layoffs in the US reached a more than two-year ...

PARIS, France: Following an 18 month controversy that exposed the workings of the global jet market, Airbus and Qatar Airways ...

At US urging, Japan to stop exporting chip technology to China

TOKYO, Japan: Japan is preparing to revise legislation to allow it to restrict the export of advanced semiconductor manufacturing equipment ...